Chelsea will be hoping to tighten their grip at the top of the table when they take on Aston Villa on Saturday. Here is the side I think Jose Mourinho will pick

Chelsea will be looking to tighten their grip at the top of the table when they take on Aston Villa at Villa Park on Saturday afternoon. Here is the side I think Jose Mourinho will select:

Goalkeeper: Thibaut Courtois has established himself as Chelsea’s No.1 so the Belgian is once again likely to keep Petr Cech out the team.

Defence: Mourinho will have to check on the fitness of Filipe Luis after the full-back missed the Man City game with a calf injury, so Cesar Azpilicueta is expected to keep his place at left-back. Kurt Zouma has kept Gary Cahill on the sidelines for the last two games but Mourinho was concerned about the pace of Raheem Sterling and Sergio Aguero in those matches, so Cahill could be recalled to deal with the more physical Christian Benteke this weekend. John Terry and Branislav Ivanovic should make up the rest of the back four.

Midfield: Cesc Fabregas is expected to once again miss out with a hamstring problem so with John Obi Mikel also struggling with a head injury, Ramires could start alongside Nemanja Matic in front of the defence.

Attack: New signing Juan Cuadrado should be in the squad but he’s likely to be named among the substitutes with Oscar lining-up alongside Eden Hazard and Willian in attack. Diego Costa serves the second of his three-match ban so Mourinho may opt for Didier Dorgba to lead the line in place of Loic Remy against Villa. 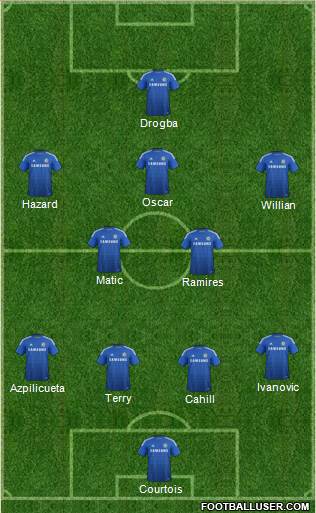