The January transfer window is now closed but that won’t stop the newspapers from speculating ahead of the summer so we’ll bring you all the news and gossip. Today, Real Madrid are linked with Thibaut Courtois…. 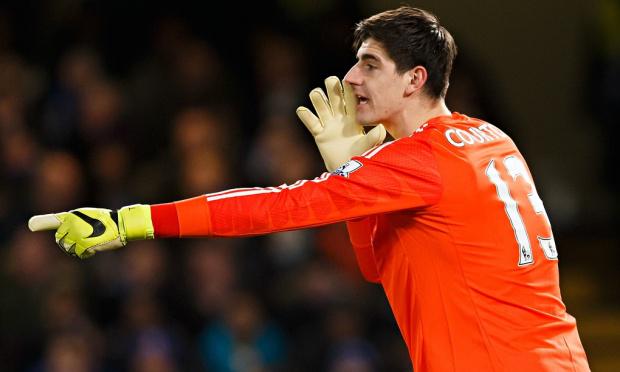 Real Madrid are lining-up a swap deal involving Raphael Varane for Chelsea goalkeeper Thibaut Courtois if they can’t land No.1 target David De Gea this summer, according to reports.

The Spanish giants are on the look-out for a long-term replacement for Ilker Casillas with the long-serving 33-year-old tipped to leave the Bernabeu at the end of the season after a difficult 18 months.

Widespread reports suggest that Carlo Ancelotti’s first choice is Manchester United’s David De Gea and Madrid are encouraged by the fact he’s yet to sign a new contract despite having just 18 months left to run on his current deal.

However, it’s believed that United are confident De Gea will eventually sign an extension to keep him at Old Trafford and his agent has confirmed they are in talks over a new deal, so it looks like Madrid are lining-up potential alternatives.

The Daily Star claim that the European champions have now identified Courtois as their back-up and are ready to move for the Belgian international this summer should they fail to land De Gea.

Courtois has developed into one of the world’s best keepers over the past two years and having impressed while on loan with Atletico Madrid in Spain, he’s continued that form in the Premier League this season after Jose Mourinho picked him as his first choice ahead of Petr Cech.

Therefore, Chelsea are highly unlikely to entertain any offers for the 22-year-old but the newspaper suggests that Madrid will try and tempt them into a deal by offering Raphael Varane as part-exchange.

Mourinho is a long-term admirer of the French centre-back and he’s been strongly linked with a move to Stamford Bridge in the past, so it may give the West Londoners something to think about if Madrid do come in with a swap deal offer.

Obviously they wouldn’t want to lose Courtois, but it could be argued that Chelsea would be stronger overall by swapping him for Varane as they have a world class keeper in Cech ready to step back in as No.1.

Varane is one of the best young defenders in world football but he’s struggled to establish himself as a regular at Madrid as Pepe and Sergio Ramos are considered the first choice pairing, so he could be open to going to Chelsea and becoming a long-term replacement for John Terry.

We’ll have to see how this all develops over the coming months but it appears both Man Utd and Chelsea will be looking on with interest as Madrid line-up their next goalkeeper this summer.