Chelsea will be looking to tighten their grip at the top of the table when they take on Everton on Wednesday evening. Here’s the side I think Mourinho will pick

Chelsea will be looking to tighten their grip at the top of the table when they take on Everton at Stamford Bridge on Wednesday evening. Here is the side I think Jose Mourinho will select:

Goalkeeper: Thibaut Courtois has established himself as Chelsea’s No.1 so the Belgian is once again likely to keep Petr Cech out the team.

Defence: Mourinho has no fresh injury worries to contend with and it appears Filipe Luis could be back in contention after missing the last two games with a calf injury, but I think we’re likely to see the same back four that started against Aston Villa. That will mean Cesar Azpilicueta at left-back, Gary Cahil and John Terry in the middle and Branislav Ivanovic at right-back.

Midfield: Cesc Fabregas is back in contention after recovering from a hamstring injury that he picked up against Liverpool two weeks ago – although the Spaniard could be deployed in a more advanced role with Oscar rested. John Obi Mikel is out with a minor knee injury so Ramires could start alongside Nemanja Matic in midfield.

Attack: New signing Juan Cuadrado is unlikely to start just yet so he’ll continue on the bench and hope to get some game-time in the second half, therefore, Willian should continue alongside Eden Hazard in attack. Didier Drogba started against Villa so could make way with Loic Remy spearheading the attack in place of Diego Costa – who services the final of his three-game ban. 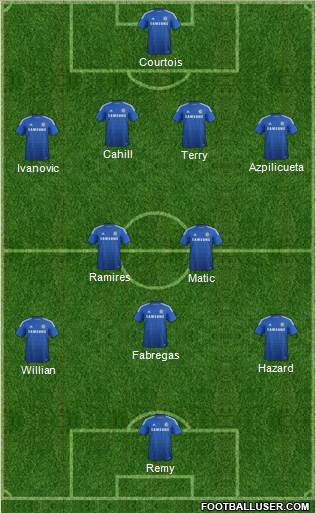