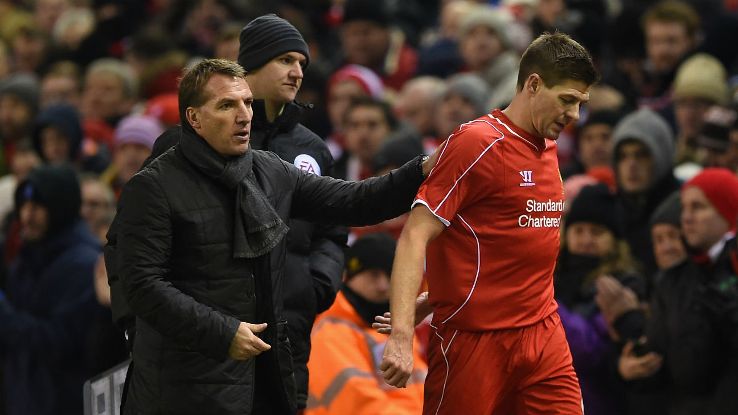 Liverpool have been dealt a fresh injury blow with skipper Steven Gerrard facing up to three weeks out with a hamstring injury he suffered during the Reds 3-2 win over Tottenham, according to widespread reports.

Having already started in the previous two games against Bolton and Everton, Gerrard started his third game in a week against Spurs on Tuesday night but was forced off in the 68th minute after pulling up with a hamstring problem.

The midfielder is due to have a scan to determine the full extent of the injury but the Guardian are one of several newspapers who are reporting that the initial prognosis is that Gerrard will be sidelined for between two and three weeks.

It means the Merseysiders will have to make do without their captain during an important stage of the season where Liverpool will be competing in three different competitions with the midfielder set to miss this weekend’s FA Cup trip to Crystal Palace, the first leg of the Europa League against Besiktas as well as the huge Premier League clash with Southampton at St Mary’s next Sunday.

If the 34-year-old is out for the full three weeks then he’ll also sit out the return leg against Besiktas in Turkey and the subsequent league game with Manchester City at Anfield on 1 March.

The news will come as a huge blow to Brendan Rodgers as it leaves him short of options in the middle of the park after Lucas Leiva was also ruled out for four to six weeks with a thigh problem.

With Lucas and Gerrard out, the Northern Irishman could decide to play Joe Allen alongside Jordan Henderson or push Emre Can into midfield with Dejan Lovren returning to the back-three after losing his place in recent weeks.

The Spurs game marked the return of Daniel Sturridge to the starting eleven with the striker making his first start since August after five months on the sidelines through injury.

The 25-year-old put in a lively display that saw him hit the post and force Hugo Lloris into making a number of good saves before being replaced by Mario Balotelli in the 74th minute.

Sturridge said after the game that he’s still got a way to go before he hits top form and admitted it was frustrating to be taken off, but he understands the club need to protect him after such a lengthy spell on the sidelines.

“Obviously I still have a few gears to go up as it was my first start for five months or so,” Sturridge is quoted as saying by the Guardian

“I was frustrated to come off because I wanted to play the 90 but they wanted to protect me and took me off. I am frustrated about that because I hate coming off but it’s one of those situations where I am also happy the team wins.”

“But I am ready to go now. That’s the main thing now, helping as best I can to push us up the table and to fight for the Europa League and FA Cup.”

“It’s frustrating to be honest but it is what it is and comes with the territory of them wanting me to remain out there and be fit. They are just trying to do their job and protect me and I can’t argue with that. I have to take that into account but it is frustrating for me because every minute counts and I have missed a lot of them, so I want as many as I can get now.”

The return to fitness is a huge boost for Liverpool as he’s been sorely missed in recent weeks, so it’s understandable Rodgers and his medical team are going to be protect him and manage his return to action carefully.