Chelsea have confirmed this afternoon that star attacker Eden Hazard has committed his future to the club after signing a new five-and-a-half-year contract. 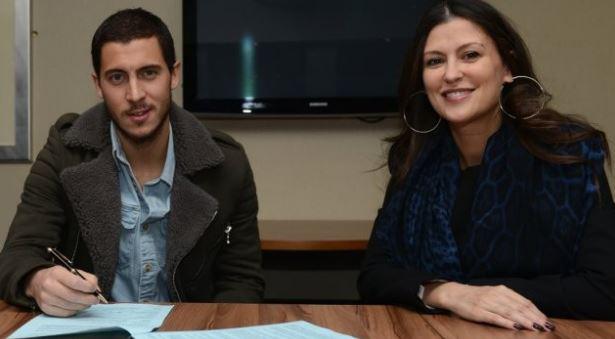 Chelsea have confirmed this afternoon that star attacker Eden Hazard has committed his future to the club after signing a new five-and-a-half-year contract.

Hazard had just entered the final 18 months of the five-year deal he signed when he moved to Stamford Bridge from French club Lille back in 2012.

The Belgian international has become a key figure for the Blues over the past two-and-a-half years and his excellent form this campaign, that’s seen him score 13 goals in 36 appearances, has helped Jose Mourinho’s side to the top of the Premier League table.

There has been constant speculation surrounding his future so it will come as a huge relief to everyone associated with Chelsea that Hazard has now committed his future to the club, with an announcement on Chelseafc.com a short time ago confirming that the 24-year-old has signed a five-and-a-half year deal.

No official figures have been released by the club but the Daily Mail are reporting that the contract is for £200,000-a-week which means the deal is worth a total of £57m over the course of the five-and-a-half years.

Having signed his new contract, Hazard told the clubs website:

‘I am very happy to sign a new contract with Chelsea,’ Hazard said. ‘Since I came here in 2012 I have always felt good and the club has been very supportive to me.

‘The manager has helped me improve a lot, the fans have been fantastic and I have an amazing understanding with my team-mates.

‘I always try to give pleasure to the supporters with my style of play and it is nice to know they appreciate my work.

‘I hope we can repay that support by winning lots of trophies, beginning with the Capital One Cup at Wembley, and after that, we can push hard towards the end of the season.’

Hazard is one of the best attackers in world football and was voted Chelsea’s Player of the Year last season having scored 17 goals in all competitions, so it’s a huge boost for him to have committed his future to the West London club.

Here you can see a video of the player signing his deal: