Tottenham will hope to secure a first leg advantage when they take on Fiorentina in the Europa League tomorrow. Here is the side I think Pochettino will select:

Tottenham Hotspur will hope secure a first leg advantage when they take on Fiorentina at White Hart Lane in the Europa League on Thursday night. Here is the starting eleven I think Mauricio Pochettino will select:

Goalkeeper: No decision for Pochettino to make here as Hugo Lloris is easily his best option in goal.

Defence: The Argentinean coach is unlikely to tinker too much from the side that narrowly lost out to Liverpool last week but we might see Ben Davies come in for Danny Rose at left-back as he’s often given a run-out in the Europa League. Otherwise, I think it will be Kyle Walker at right-back with Eric Dier continuing alongside Jan Vertonghen at the back.

Midfield: Nabil Bentaleb and Ryan Mason have forged an impressive partnership in the middle of the park this season and appear to be Pochettino’s first choice paring, so I expect they will start again in midfield and keep the likes of Benjamin Stambouli and Etienne Capoue on the sidelines.

Attack: Spurs have a fully-fit squad to choose from and Pochettino has admitted he’ll need to make some tough decisions on who to select in the squad. However, an easy decision for the coach is who to start up front with the in-form Harry Kane looking to continue his sensational form. Christian Eriksen is also a cert to start while I think Erik Lamela and Mousa Dembele will complete the attacking three.

Here’s how I think Spurs will line-up against Fiorentina: 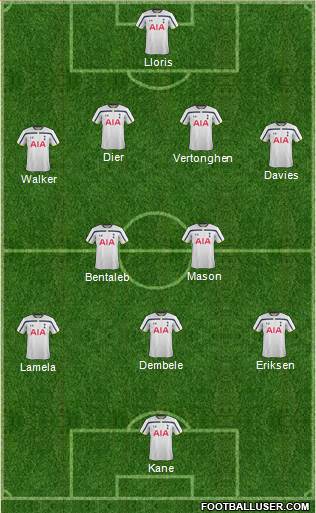