The January transfer window may be closed but that won’t stop the newspapers from speculating ahead of the summer so we’ll bring you all the news and gossip. Today, Memphis Depay is ready to snub Liverpool for a move to Man Utd….

Dutch starlet Memphis Depay is set to snub interest from Liverpool after telling Manchester United he wants to make a €30m move to Old Trafford this summer, according to reports.

Depay has emerged into one of the hottest young properties in Europe after a stunning season that’s seen him score 22 goals and provide 6 assists in 33 appearances to help PSV go 11 points clear at the top of the Eredivisie table.

His impressive form has led to interest from the Premier League with Manchester United strongly linked over the past year while recent reports suggest that Liverpool are keen to open formal talks about taking him to Anfield this summer.

However, it appears the 21-year-old is ready to snub the Merseysiders and has his heart set on a move to Old Trafford as Goal are reporting that he’s already told United he wants to join them at the end of the season.

What’s more, the publication claims that United chiefs have made ‘strong progress’ in negotiations with PSV and the wingers representatives over a potential €30m (£22m) deal.

PSV have already acknowledged that they won’t be able to keep hold of the attacking midfielder this summer with head coach Phillip Cocu recently saying:

“Of course Memphis will be sold, you can’t stop that, but it’s okay.

“It’s great you can build up a player like him, who breaks through, succeeds at PSV then leaves the club when he’s ready for a bigger step. That’s great.” Cocu is quoted as saying by the Mirror.

United were strongly linked with Depay last summer but Goal suggests that Louis van Gaal – who knows the player well from their time together with the Dutch national team – advised him to remain at PSV for another season before making his big move at the end of this campaign.

The pacey attacker has been fuelling speculation over a move to Old Trafford on social media recently and after ‘favouriting’ an article linking him with a move to United earlier this month, the youngster set tongues wagging again this week after ‘favouriting’ a tweet from a United fan which suggested he’d consider ‘kill himself’ if Depay opted to join Liverpool. 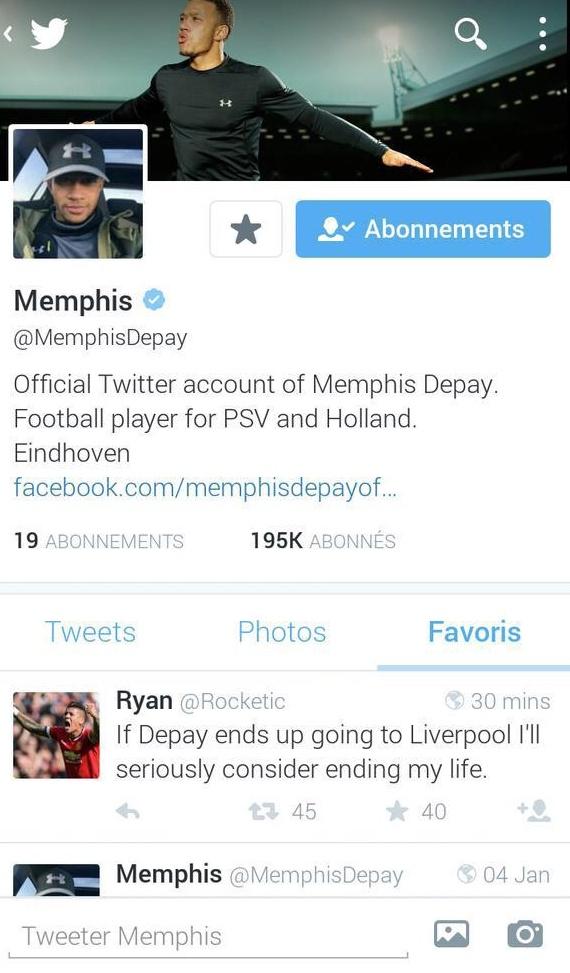