The January transfer window may be closed but that won’t stop the newspapers from speculating ahead of the summer so we’ll bring you all the news and gossip. Today, Memphis Depay has dropped a hint that he’s keen on Man Utd move….

Tottenham target Memphis Depay has dropped a huge hint on Twitter that he’s eyeing a potential £20m move to Manchester United this summer, according to reports.

Depay has emerged as one of the hottest young properties in Europe after enjoying a sensational season with PSV that’s seen him score 22 goals and provide 6 assists in 32 appearances so far, despite being used predominantly from the wing.

His impressive form has attracted interest from the Premier League with Tottenham and Manchester United strongly linked with a move for the 21-year-old in recent months.

The Mirror claims that Louis van Gaal is expected to make a formal move for the attacker when the transfer window reopens this summer while Spurs boss Mauricio Pochettino is also reportedly keeping a close eye on his progress.

However, it seems it’s interest coming from Old Trafford that’s caught Depay’s eye as the Dutch international has dropped a huge hint that he welcomes interest from United after ‘favouriting’ a link on Twitter to an article about van Gaal’s interest in him [see image below]. 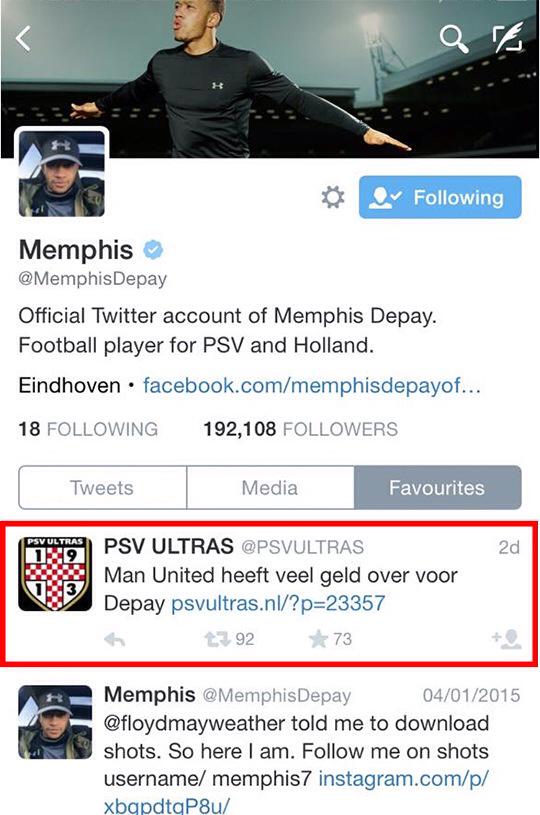 The tweet is written in Dutch but translates to “Man United has a lot of money for Depay.”, and although Depay later remove the favourite, it wasn’t before quick-thinking followers grabbed screen-shots which have set tongues wagging.

van Gaal is expected to be busy in the transfer market this summer and I’m sure the Old Trafford faithful would love to see an exciting young talent like Depay arrive.

The player was part of van Gaal’s Dutch squad at the 2014 World Cup and Dutch journalist Hugo Borst wrote in his biography of the United manager that he and Depay enjoy a strong bond.

“Another father has entered his [Depay’s] life, in the shape of national coach Louis van Gaal,”

“An ideal situation for Memphis and Louis too. A welcome outlet for his bottled-up paternal affections.” Borst is quoted as saying by the Mirror.

So it seems that if United do make their interest official this summer then Tottenham will have their work cut out to try and persuade the youngster to opt for a move to White Hart Lane instead.

Depay’s stunning form this season has led to comparisons to fellow Dutchman Arjen Robben and PSV coach Phillip Cocu has recently admitted that they are powerless to stop him being sold at the end of such an impressive season.

“Of course Memphis will be sold, you can’t stop that, but it’s okay.

“It’s great you can build up a player like him, who breaks through, succeeds at PSV then leaves the club when he’s ready for a bigger step. That’s great.” Cocu is quoted as saying by the Mirror.

Obviously any talk of a move to England is just pure speculation at this point but it would be great to see how Depay would get on here in the Premier League.

United have been crying out for an exciting midfielder this season and with a reported price-tag of £20m, it could be an excellent investment for the Red Devils if they manager to complete a deal this summer.