Arsene Wenger has given a team news and injury update ahead of Arsenal’s trip to St James’ Park on Saturday afternoon to take on Newcastle United. 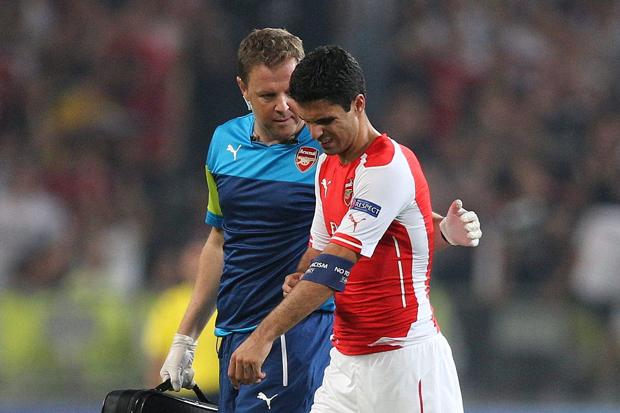 Arsenal will look to put pressure on the top two in the Premier League when they take on Newcastle United at St James’ Park on Saturday afternoon.

Ahead of the game, Arsene Wenger has been speaking to the media at his pre-match press conference and given Arsenal.com a team news and injury update.

The boss confirmed that we’ve suffered no new injuries but feels that Mikel Arteta and Mathieu Debuchy are still at least two weeks away from returning to full fitness.

Arteta has been on the sidelines since injuring his ankle against Borussia Dortmund was back in late November but after several set-backs he finally returned to light training last week.

The skipper was joined by right-back Debuchy after he stepped up his comeback from a dislocated shoulder that he suffered against Stoke City in January.

However, while it’s great to see the duo on the road to recovery, Wenger has warned that they – along with Jack Wilshere – are still two to three weeks away from being back in contention to return to the first team with Arteta possibly being available after the upcoming international break.

There is also good news on Tomas Rosicky as the Czech international is expected to make his return to the squad after overcoming illness that’s kept him on the sidelines for our last three games.

We have no new big injuries, we have some knocks, but nothing major. Mathieu Debuchy is two or three weeks away, Arteta and Wilshere as well. Arteta will maybe come back after the [international] break. Tomas Rosicky is hopefully available again for the weekend.

on Mikel Arteta and Mathieu Debuchy…

They are still two or three weeks away.

A minimum two week absence means Arteta and Debuchy won’t be available again until April. We head into the international break after Saturday’s clash with Newcastle and Liverpool will be the visitors to the Emirates on April 4th. It looks like Arteta could be available for that match but Debuchy will have to wait a little longer.

It will be a big boost to have Mikel available again as we’ve missed his experience and composure in the middle of the park at times in recent weeks, but I still think he’ll struggle to force his way back in to the first team due to the emergence of Francis Coquelin.

Debuchy may also have a fight on his hands as Hector Bellerin is developing into a fine full-back, although I would personally still go for the experienced Frenchman when fully fit.