Manchester United, Chelsea, Tottenham and Liverpool players have all been nominated for the PFA Young Player of the Year Award, it’s been announced this evening

Manchester United, Chelsea, Tottenham and Liverpool players have all been nominated for the PFA Young Player of the Year Award, it’s been announced this evening…

Liverpool duo Philippe Coutinho and Raheem Sterling have been nominated for the PFA Young Player of the Year Award along with  David De Gea, Harry Kane, and Chelsea pair Thibaut Courtois and Eden Hazard.

Coutinho has scored six goals so far this season with the Brazilian playmakers form being particularly impressive since the turn of the year when he netted vital goals against Manchester City and Southampton.

Liverpool team mate Sterling is also in the running for the young player gong having scored 11 times in all competitions for the Merseysiders this campaign, and they’ll be up against Manchester United stopper De Gea – who’s been in terrific form between the sticks all season.

Chelsea sit top of the Premier League table so it’s no surprise they have two players nominated with Eden Hazard and goalkeeper Courtois both named in the six-man shortlist.

However, the early favourite is Tottenham striker Harry Kane as he’s enjoyed a sensational break-through year that’s seen him score 29 goals so far and he recently scored just seconds into his England debut.

Coutinho, Kane, Hazard and De Gea have all also been nominated for the PFA Players’ Player of the Year Award, and the winners will be announced at the annual PFA Awards Dinner in London on April 26. 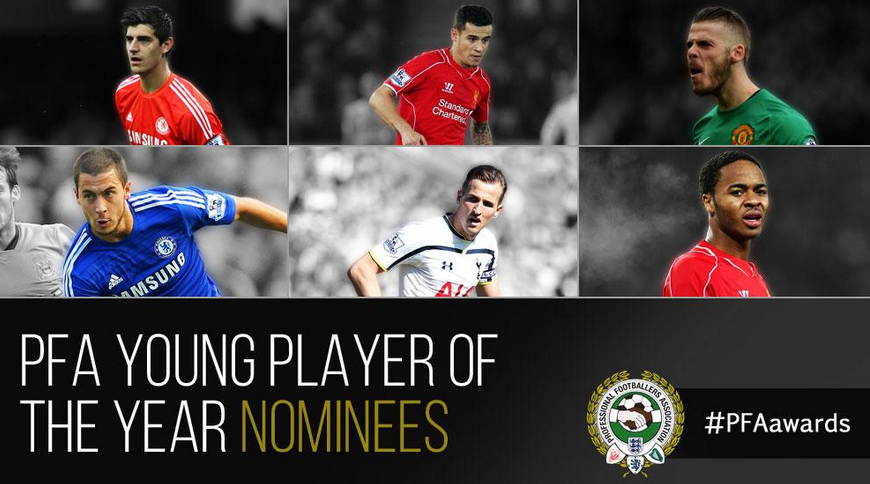