Arsenal will be looking to secure third spot when they take on Sunderland at the Emirates tomorrow. Here is the side Gooner Mac thinks Arsene Wenger will pick

Arsenal will be looking to secure third spot in the table when they take on Sunderland at the Emirates on Wednesday night. Here is the side Gooner Mac thinks Arsene Wenger will select:

Goalkeeper: David Ospina is firmly in favour under Wenger now and although the Colombian came under scrutiny for his part in Man Utd’s goal on Sunday, he’s expected to keep his place ahead of Wojciech Szczesny tomorrow.

Defence: I’d be surprised if the boss doesn’t make a few changes for this game as some of the players looked a little jaded on Sunday. Nacho Monreal was out-of-sorts and was at fault for the Herrera goal so I think he might be given a breather with Kieran Gibbs coming in at left-back.

Laurent Koscielny is also a doubt with flu and there is no point taking any risks with him, so I think Gabriel will start alongside Per Mertesacker at the heart of defence. Mathieu Debuchy remains out so Hector Bellerin will continue at right-back.

Midfield: Santi Cazorla was another player who was below par at the weekend and with Jack Wilshere making a positive impact off the bench, I think he might come in to make his first start since November alongside Francis Coquelin.

Alex Oxlade-Chamberlain is still nursing a hamstring problem so is definitely out of the game while Mikel Arteta is still not match fit.

Attack: Danny Welbeck has also been ruled out after failing to recover from a knee injury so Aaron Ramsey is likely to continue on the right-wing. Theo Walcott did well having come off the bench on Sunday but he’s clearly out-of-favour under Wenger so I’d be surprised if he was handed a start tomorrow.

I don’t think there will be any changes to the rest of the attack either which means Mesut Ozil and Alexis Sanchez will continue to support Olivier Giroud up front. 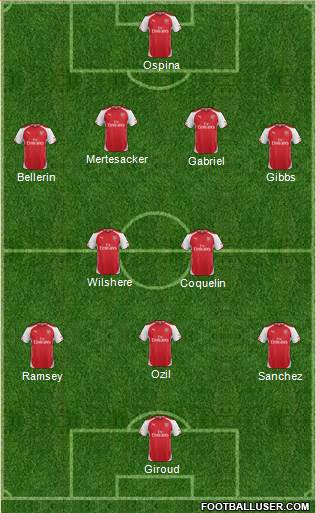