Arsenal, Chelsea, Man Utd and Tottenham have all had players included in Gareth Southgate’s England squad for this summers European Championship Finals

Arsenal, Chelsea, Man Utd and Tottenham have all had players included in Gareth Southgate’s provisional England squad for this summers European Championship Finals….

The Three Lions head into next month’s tournament after qualifying for the finals of the 2015 European Championships and boss Gareth Southgate has named his provisional 27-man squad.

Those 27 will have to be trimmed to just 23 by June 2nd, when the England Under-21’s will then play Belarus in a friendly before heading to the Czech Republic where they’ll take on Italy, Portugal and Sweden in a tough Group B.

Perhaps the stand-out name to be selected is Tottenham striker Harry Kane as he’s been included in the Under-21’s squad after an excellent season at White Hart Lane that’s seen him break the 30-goal barrier.

Chelsea youngster Ruben Loftus-Cheek has also been rewarded for breaking into Jose Mourinho’s side in recent weeks with a call-up to the Under-21’s and he joins team-mates Nathaniel Chalobah and Patrick Bamford in the squad.

Arsenal also have two representatives in Calum Chambers and Carl Jenkinson, while Manchester United have just the one player included in Jesse Lingard with Luke Shaw not deemed fit enough to take part this summer. 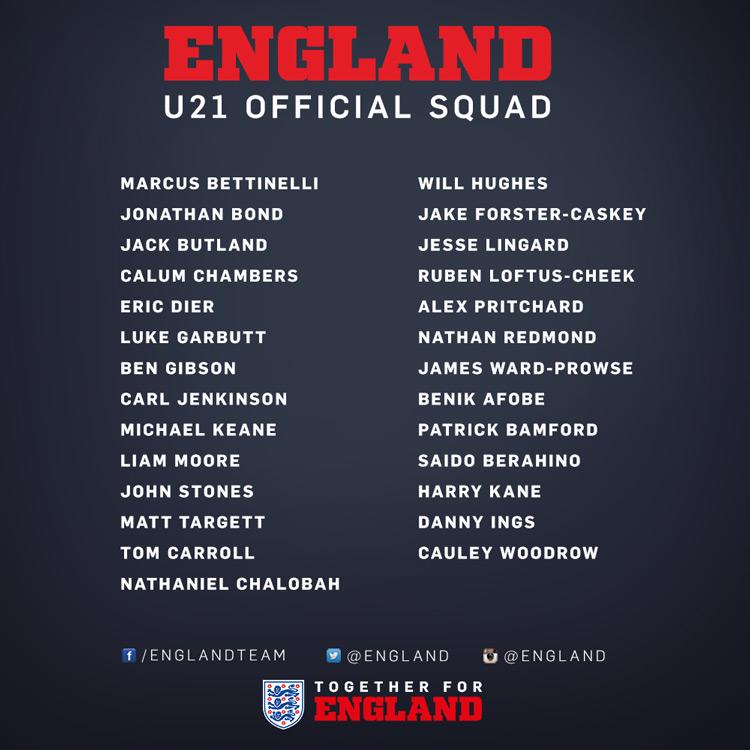