Manchester United are on the verge of wrapping up a deal to sign highly-rated Internacional midfielder Rodrigo Dourado, according to reports.

As the opening of the summer transfer window approaches, managers are working hard identifying targets and lining-up potential deals so we’ll bring you all the news and gossip. Today, Manchester United are closing in on Rodrigo Dourado… 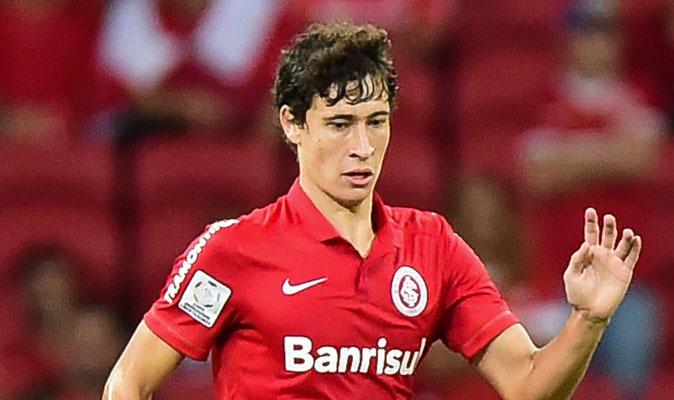 Manchester United are on the verge of wrapping up a deal to sign highly-rated Internacional midfielder Rodrigo Dourado, according to reports.

Louis van Gaal is expected to be busy in the transfer market this summer as he looks to build a squad capable of challenging for top honours next season and it appears he’s on the look out for midfield reinforcements.

The Daily Mail claim that United scouts have been sent to Brazil to make regular checks on young midfielder Dourado in recent months and they’ve sent back encouraging reports to van Gaal.

The 20-year-old has broken into the Internacional first team this season and has been hugely impressive in the defensive midfield role during his 20 appearances, and it seems he could now be heading for the Premier League.

The newspaper suggests that United are in negotiations with the Brazilian outfit and a deal is now understood to be on the verge of being agreed – although Internacional are reluctant to sell until after next months Copa Libertadores semi-finals.

It’s difficult to know how much truth there is behind the Mail’s report as they don’t seen to have any concrete information on a possible fee or contract details for the player, so I’d take the rumour with a pinch of salt for now.

However, if United do end up signing Dourado he would become their second summer signing after Memphis Depay and it will be interesting to see if he manages to get a work permit as he’s yet to earn a single cap for the Brazilian senior team and has only represented the youth sides.

If the young South American does somehow manage to gain a work permit, then he’ll provide depth and competition to Michael Carrick, with van Gaal identifying the holding role as an area he needs to strengthen as the 34-year-old struggled with injury last season.

I’m sure it would take Dourado some time to adapt so he’s be unlikely to make any real impression on the first team during the first half of next season, but he certainly looks to have a bright future ahead of him.