With the summer transfer window in full swing, managers are working hard trying to strengthen their squads ahead of the new season so we’ll bring you all the news and gossip. Today, more on the future of Gonzalo Higuain…. 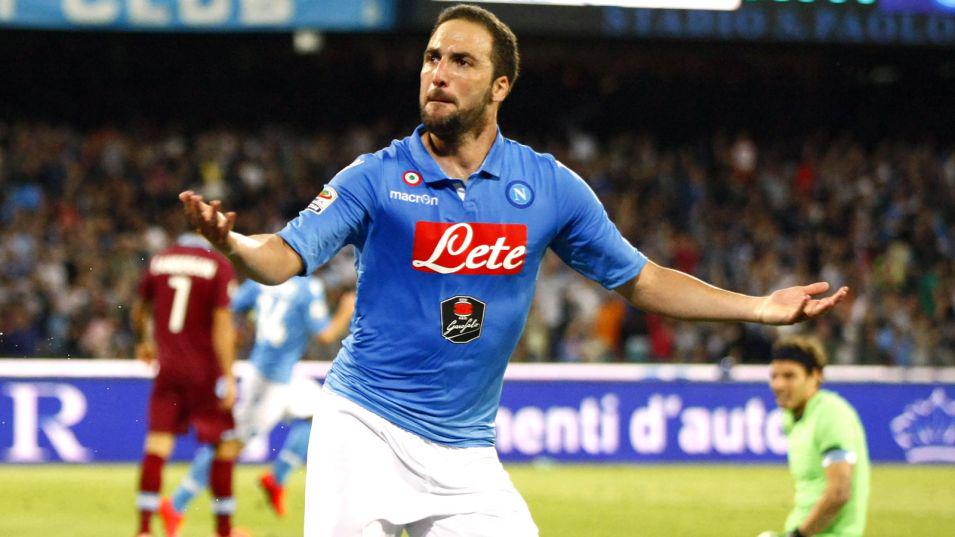 Chelsea and Manchester United have been handed a boost in their pursuit of Gonzalo Higuain after his agent confirmed the striker has turned down a new contract offer from Napoli, according to the Express.

Higuain is a name many should be familiar with as he’s constantly been linked with a move to the Premier League with reported interest dating all the way back to his days with Real Madrid.

The Argentinean international has continued to forge a reputation as one of the deadliest strikers in European football since joining Napoli two years ago after scoring 53 goals in 102 appearances for the Serie A outfit.

Speculation has once again linked Higuain with a move to England in recent months with the Mirror reporting earlier this summer that Chelsea were lining-up a bid for the 27-year-old while the Metro also claimed that Manchester United had offered the player a lucrative five-year deal.

So far, nothing has come of their reported interest but the Express suggest that both clubs have continued to monitor Higuain’s situation and have now been handed a boost after his agent confirmed the striker has turned down a new one-year contract extension offer from Napoli.

However, Nicolas Higuain – who is the strikers brother but also acts as his agent – also revealed that the player expects to remain with Napoli and claims he hasn’t held talks with any other big clubs about a potential move.

“We had a meeting with the president [Aurelio De Laurentiis] in Venice 10 days ago,” Higuain’s agent is quoted as saying by the Express

“We talked about everything. He offered a one-year contract extension, but in my opinion – and ours – we will continue with the original contract, expiring in 2018.

“The contract isn’t that different to the one we signed before, so for us it’s not a real offer. We are calm and happy to continue with the current conditions.

“At the moment, we have faith that Gonzalo will stay at Napoli, with a team which is 100 per cent focused and can win something.

“It seems strange, but the big clubs have not contacted me, nor have I spoken with anyone.”

The news that Higuain has turned down an extension is likely to have alerted the likes of Chelsea and United but we’ll have to wait and see whether either club decides to formalise their interest before the transfer window shuts.

To me, it sounds as though Higuain is only content to remain at Napoli because there has been no official offers put on the table and I’m sure his stance would change if a top team like Chelsea or United came calling.

Napoli missed out on qualifying for the Champions League after finishing fourth in Serie A last season and a player of Higuain’s quality should be playing at the highest level.

United could certainly do with another option up front after losing Robin van Persie and Radamel Falcao and Louis van Gaal hasn’t been shy in splashing the cash so far this summer, so I wouldn’t be surprised if they made a move for Higuain over the coming weeks.

Chelsea don’t appear to be in any desperate need for another front-man but with Diego Costa’s hamstring already playing up, Mourinho might be tempted if Higuain was available at the right price.

However, any potential deal is likely to cost Chelsea or United a small fortune as the Express claim that he has a £66m buy-out clause in his contract and Napoli are unlikely to sell him on the cheap.

We’ll have to wait and see how things develop but I’d love to see Higuain come to the Premier League as I think he’s a top class striker who’d be a real success here in England.