Man Utd will get their new Premier League season underway when they take on Tottenham at Old Trafford on Saturday. Here’s the side I think van Gaal will pick:

Manchester United will get their new Premier League season underway when they take on Tottenham Hotspur at Old Trafford on Saturday afternoon. Here is the side I think Louis van Gaal will pick:

Goalkeeper: David de Gea hasn’t looked himself in pre-season and it’s safe to say his form has been affected by speculation over his future. Sergio Romero has come in on a free transfer but I think we’ll see van Gaal stick with De Gea as his No.1 this weekend.

Defence: Matteo Darmian is set for his competitive debut at right-back after making the move from Torino this summer while Luke Shaw should start on the opposite flank.

Chris Smalling appears to have cemented his place in the back four while Daley Blind has been widely tipped to start at centre-back after playing there in pre-season. This would see the likes of Phil Jones, Marcos Rojo and Jonny Evans all miss out.

Midfield: Michael Carrick is fit again after niggling injury problems restricted his game-time last season and he should be partnered by summer signing Morgan Schneiderlin in the middle of the park. Bastian Schweinsteiger is struggling for fitness so I think he’ll be given more time before making his competitive debut.

Attack: Wayne Rooney is set to lead the line up front with Memphis Depay expected to be deployed just behind the England international. Angel Di Maria has now completed his move to PSG, so van Gaal doesn’t have too many options in attack so I think we’ll see Ashley Young and Juan Mata on the wings. 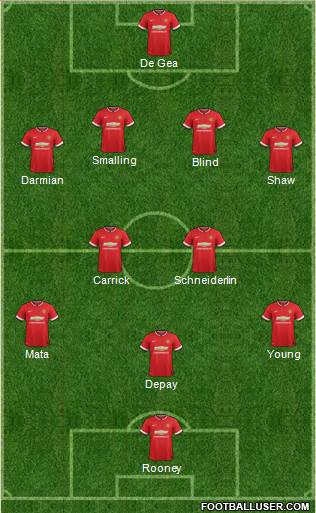