Chelsea will look to get their Premier League season back on track against Arsenal on Saturday afternoon. Here is the side I think Jose Mourinho will pick:

Chelsea will look to get their Premier League season back on track against Arsenal at Stamford Bridge on Saturday afternoon. Here is the side I think Jose Mourinho will pick:

Defence: Mourinho left-out Branislav Ivanovic for last night’s 4-0 win over Maccabi Tel Aviv but although Baba Rahman did well-enough on his full debut, I think we’ll see the Serb come back in which will mean Cesar Azpilicueta moving across to left-back.

Gary Cahill came back in to the side last night with John Terry left among the substitutes and I think Mourinho may also be tempted to leave his skipper out against Arsenal. Theo Walcott is almost certain to start up front for the Gunners and it would be suicide to put Terry up against his pace, so Kurt Zouma seems the more logical choice.

Midfield: Nemanja Matic is another who was left out against Maccabi but he’s expected to be recalled on Saturday with Ruben Loftus-Cheek dropping out despite his encouraging display in Europe. Cesc Fabregas was back in form last night so expect him to start against his former club.

Attack: Willian appears to have been ruled out after picking up a hamstring injury while Pedro is also set to miss out with a thigh injury, so Mourinho has limited options in attack.

Ramires made a successful return last night so we could see him from the start to offer protection against the likes of Alexis Sanchez down the wing. Diego Costa came off the bench to score last night and I expect he’ll be back up front on Saturday along with Eden Hazard and Oscar. 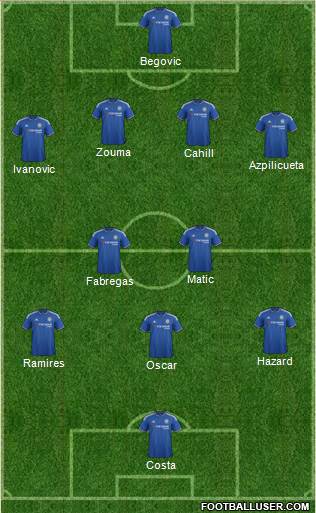