Arsenal will look to get back on track after their European disappointment when they take on Chelsea on Saturday. Here is the side we think Wenger will select.

Arsenal will look to get back on track after their European disappointment when they take on Chelsea at Stamford Bridge on Saturday afternoon. Here is the side Gooner Mac thinks Arsene Wenger will select for the game:

Goalkeeper: Petr Cech was surprisingly left out against Dinamo Zagreb last night with Arsene saying he was ‘rested mentally’ but the Czech stopper is certain to return between the sticks to face his former side this weekend.

Defence: Per Mertesacker could be back in contention after recovering from a virus but I think the boss will stick with Laurent Koscielny and Gabriel in the middle of defence.

There is likely to be a couple of changes though with Hector Bellerin coming in for Mathieu Debuchy and  Nacho Monreal replacing Kieran Gibbs at left-back after they were rested in Europe.

Midfield: Francis Coquelin was another who was sorely missed last night as Mikel Arteta struggled badly in his place, so the Frenchman should return alongside Santi Cazorla in the centre of the park against Chelsea.

Jack Wilshere is out until Christmas after undergoing surgery on his fractured fibula so will obviously not be available.

Attack: Aaron Ramsey didn’t make the trip to Croatia so is sure to start on Saturday and he’s most likely to play from the right wing once again. Alex Oxlade-Chamberlain was dangerous going forward last night but he let himself down defensively so I can’t see the boss taking a risk with him up against the likes of Eden Hazard.

Mesut Ozil and Alexis Sanchez are expected to start while Theo Walcott could start up front after scoring against Zagreb from the bench with Olivier Giroud set to be dropped after his dismal display last night. 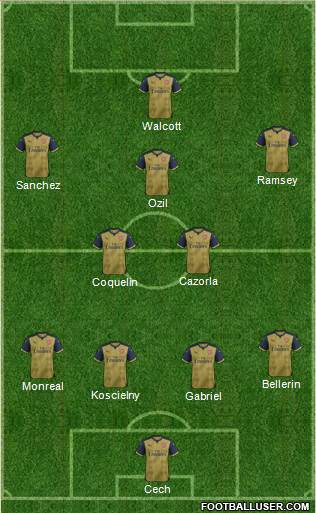