Diego Costa, Gabriel, Arsenal and Chelsea have all been slapped with FA charges today while Santi Cazorla has also been reprimanded. See full details here 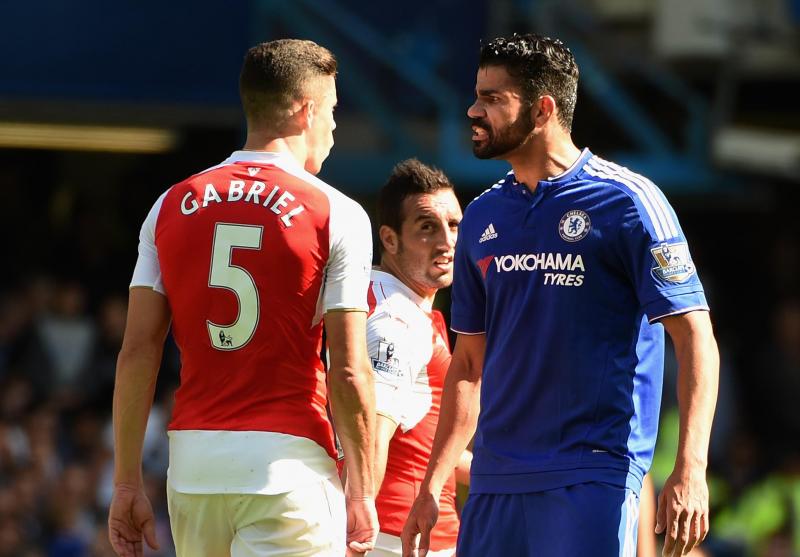 Diego Costa has been charged with violent conduct while Gabriel has also been charged with improper conduct following Chelsea’s controversial 2-0 win over Arsenal on Saturday afternoon, the FA have confirmed today.

Costa has been widely criticised for his behaviour during the game at Stamford Bridge which saw him first throw an elbow at Laurent Koscielny before subsequently clashing with Gabriel and playing a key role in the defender being sent off.

The FA have now decided to charge the Spanish international with violent conduct for the off-the-ball incident involving Koscielny, which was not seen by any of the match officials at the time.

A statement on thefc.com confirmed the news:

Diego Costa has been charged for an alleged act of violent conduct which was not seen by the match officials but caught on video. The Chelsea forward was involved in an incident with Arsenal’s Laurent Koscielny in the 43rd minute of the game. He has until 6pm tomorrow [Tuesday 22 September 2015] to reply.

If found guilty, Costa will face a three-match ban that will see him miss Wednesday’s Capital One Cup clash with Walsall as well as Premier League games against Newcastle and Southampton.

Given that Jose Mourinho played down the incident and claimed Costa was his Man of the Match on Saturday, you could expect the Blues boss to push for an appeal, but it’s likely to be futile given the video evidence that proves he threw an arm at Koscielny.

In the same statement, the FA also confirmed that Gabriel has been charged with improper conduct for his behaviour following his dismissal, which saw the Brazilian remonstrate with the match officials and Costa after he was sent to the stands.

Arsenal playmaker Santi Cazorla was also sent off late on at Stamford Bridge for a second bookable offence and the FA have revealed that the Spaniard has been warned about his future conduct.

In addition to the charges against the players, Arsenal and Chelsea have both been charged with failing to control their players after the fracas on Saturday. Both clubs and Gabriel have until Thursday at 6pm to respond to the charges.

Here is the rest of the FA’s statement:

Finally, both clubs have been charged for failing to control their players under FA Rule E20.

Both clubs and Gabriel have until 6pm on Thursday [24 September 2015] to reply.

Arsenal have just confirmed on Arsenal.com that they have appealed both the sending off and the three-match ban given to Gabriel, but they are yet to respond to the improper conduct charge.

It will be interesting to see how all of this plays out but I suspect Costa will end up serving his three-match ban while Gabriel is also likely to miss three games.