Tottenham take on Arsenal in the 3rd round of the League Cup at White Hart Lane on Wednesday night. Here is the side we think Pochettino will select.

Tottenham take on North London rivals Arsenal in the 3rd round of the Capital One Cup at White Hart Lane on Wednesday night. Here is the side we think Mauricio Pochettino will select for the game:

Goalkeeper: Hugo Lloris is expected to be handed a well-earned rest with Michel Vorm coming in to start between the sticks tomorrow.

Defence: Pochettino has already confirmed he’ll use the full depth of his squad so he’s expected to make several changes from the side that beat Crystal Palace on Sunday with Ben Davies, Kyle Walker and Jan Vertonghen among those rested.

Kieran Trippier could come in at right-back while Danny Rose should take his place on the left side with Kevin Wimmer and Federico Fazio also coming in at the back.

Check out our predicted Arsenal starting line-up for the game

Midfield: Ryan Mason, Nabil Bentaleb and Mousa Dembele have all been ruled out so Eric Dier may have to once again start in midfield with youngster Tom Carroll likely to come in for Deli Alli.

Attack: Nacer Chadli, Son Heung-Min and Harry Kane are set to be rested with Andros Townsend joining Erik Lamela in attack. Christian Eriksen should start after making a successful comeback from injury off the bench at the weekend while Clinton N’Jue could be handed his full debut up front. 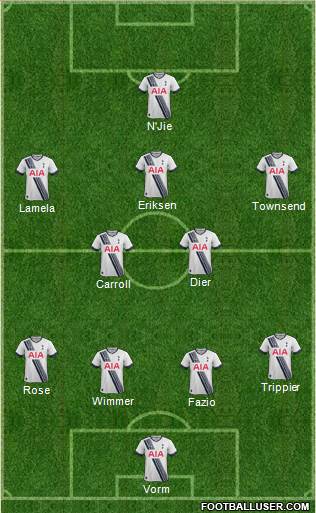