Tottenham will look to get back on track when they take on Manchester City at White Hart Lane on Saturday. Here is the side we think Pochettino will select.

Tottenham will look to get back on track when they take on Manchester City at White Hart Lane on Saturday afternoon. Here is the side we think Mauricio Pochettino will select for the game:

Goalkeeper: Hugo Lloris is expected to be recalled to the starting eleven after being rested last night with Michel Vorm dropping back to the bench.

Defence: Pochettino will recall a number of first team regulars with Ben Davies likely to come back in for Danny Rose at left-back despite his impress display against the Gunners.

Kyle Walker should also replace Kieran Trippier at right back while Jan Vertonghen and Toby Alderweireld will resume their partnership in the middle of defence.

Midfield: Ryan Mason could make his return after training all week following a knee injury. If he doesn’t make it then Eric Dier should continue in midfield.

Nabil Bentaleb and Mousa Dembele will face late fitness tests but Deli Alli is expected to get the nod in the middle of the park after an impressive start to life in North London.

Attack: Son Heung-Min will come back in to the starting eleven after only being named on the bench against Arsenal while Christian Eriksen should retain his place after showing no ill-effects having made his first start last night.

Harry Kane should once again start up front despite his goal-scoring drought continuing while Erik Lamela could come back in on the right-wing with Andros Towsend dropping out. 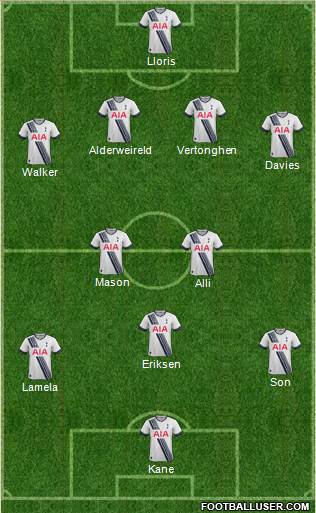