Arsenal will look to get back on track when they take on Manchester United at the Emirates on Sunday. Here is the side we think Wenger will select.

Arsenal will look to bounce back following their Champions League defeat when they take on Manchester United at the Emirates on Sunday. Here is the side Gooner Mac thinks Arsene Wenger will select for the game:

Goalkeeper: Wenger made the controversial decision to start David Ospina against the Greek side and it backfired but Petr Cech is expected to return between the sticks this weekend.

Defence: Laurent Koscielny was forced off with a hamstring injury on Tuesday night so the Frenchman is likely to miss out on Sunday meaning Per Mertesacker should start alongside Gabriel at the back.

Hector Bellerin should retain his place at right-back but Nacho Monreal is expected to come back in for Kieran Gibbs on the left side of the defence.

Midfield: Francis Coquelin came through the Olympiacos game unscathed after returning from a knee injury so he should be passed fit to play on Sunday and he’s likely to be joined once again in midfield by Santi Cazorla.

Mathieu Flamini and Mikel Arteta will be assessed before the game after missing the European tie through injury while Jack Wilshere is out until Christmas following surgery.

Attack: Aaron Ramsey was rested in midweek so he’ll come back in on the right with Alex Oxlade-Chamberlain set to make way while Mesut Ozil and Alexis Sanchez are expected to retain their places in attack.

Theo Walcott continued his fine form in front of goal with another strike on Tuesday so I think we’ll see him once again start ahead of Olivier Giroud up front.

Check out our predicted Man Utd line-up by clicking here 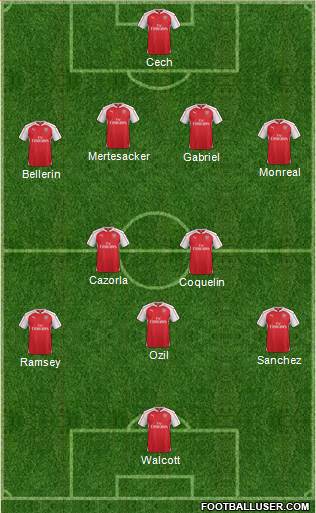