Manchester United they take on rivals Manchester City at the Etihad Stadium on Sunday afternoon. Here is the side I think van Gaal will pick:

Manchester United will be looking to give their top four hopes a major boost when they take on rivals Manchester City at the Etihad on Sunday. Here is the side I think van Gaal will pick:

Goalkeeper: David de Gea is certain keep his place in goal after another excellent performance against Liverpool in the Europa League at Old Trafford last night. I’m not sure even the brilliance of De Gea will be able to keep City at bay for the entire ninety minutes but 888sport are offering tempting odds of 9/5 that it will be 0-0 at half-time.

Defence: van Gaal is likely to make at least one change to the back four that started last time out with Matteo Darmian coming in at right-back meaning youngster Guillermo Varela is set to drop to the substitutes bench. Cameron Borthwick-Jackson and Antonio Valencia are back in contention but I think we’ll see Chris Smalling, Daley Blind and Marcos Rojo retain their places in defence.

Bet on Sunday’s Manchester derby with 888sport and you’ll get TREBLE winnings on your first bet! Take advantage of this incredible offer here

Midfield: Bastian Schweinsteiger continued his comeback from injury with another appearance off the bench last night so the German could now come back in to the starting eleven with Marouane Fellaini the favourite to drop out. Morgan Schneiderlin could also get a recall in the middle of the park with Michael Carrick given a breather after starting in each of the last three games.

Attack: Ander Herrera missed the draw with Liverpool on Thursday night due to a groin problem so the Spaniard could miss out on a place in the starting eleven on Sunday afternoon. Juan Mata returns from a one-game domestic ban and he could start in the number 10 role while Anthony Martial should keep his place in attack.

However, the Frenchman is likely to play from the wing once again with Marcus Rushford leading the line up front and the youngster will be looking to get himself back on the score-sheet after a barren few games following his sensational burst on to the scene last month. The 18-year-old is 3/1 with 888sport to score at any time if you fancy him to get back among the goals this weekend. 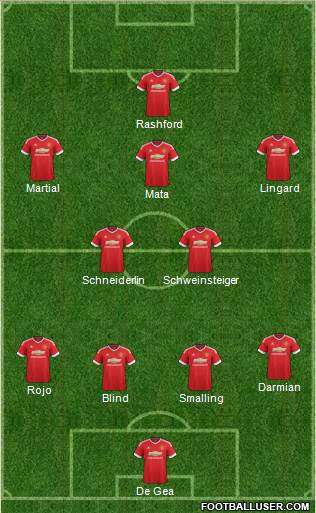 Man City 1-1 Man Utd: Neither side is in particularly impressive form lately and I don’t think we’ll see a classic this weekend after both teams’ European adventures in midweek. City are the home team and are rightly regarded as favourites but United arguably have more to play for as they look to break in to the top four so I can see Louis van Gaal’s men taking home a point with Anthony Martial being the last goal-scorer – which is available at odds of 15/2.

888sport are offering new customers the chance to win 3x winnings on your first bet – meaning a $10 bet could win you $300 if you place the right bet. Take advantage of this incredible offer by following my tips on the Manchester City v Manchester United match or any other weekend game here.