Chelsea take on Manchester City at Stamford Bridge on Saturday afternoon. Here is the side we think Guus Hiddink will select for the game:

Chelsea take on Manchester City at Stamford Bridge on Saturday afternoon. Here is the side we think Guus Hiddink will select for the game:

Goalkeeper: Thibaut Courtois is expected to be recalled after Asmir Begovic was surprisingly selected for last weeks defeat at Swansea.

Defence: John Terry is out for at least another two weeks but Gary Cahill is set to return to the squad after recovering from a hip problem so Matt Miazga could drop out with Branislav Ivanovic keeping his place at the back.

Midfield: Hiddink has stuck with John Obi Mikel in the holding role in recent months so with Nemanja Matic a doubt with a calf problem, the Nigerian is likely to once again start against City. Cesc Fabregas should keep his place in the middle of the park, while Oscar could replace Ruben Loftus-Cheek in the advanced central midfield role.

Attack: Diego Costa is back after serving his two game suspension meaning Alexandre Pato will drop to the bench. Eden Hazard remains a doubt with an on-going hip injury so Kenedy could start on the left with Pedro keeping his place on the right as Willian is carrying a knock. 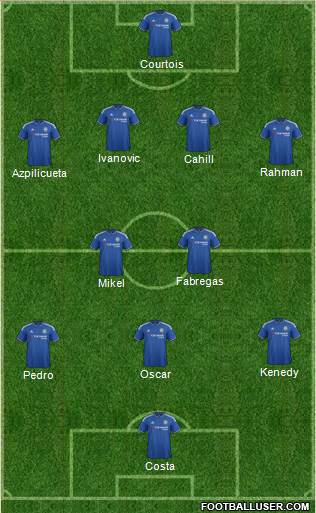