The opening of the summer transfer window is almost upon us so we’ll bring you all the latest transfer rumours and gossip from around the globe. Today, Arsenal and Liverpool are handed a boost in their pursuit of Gonzalo Higuian…

Arsenal and Liverpool have been handed a boost in their pursuit of Gonzalo Higuian after his agent confirmed the striker won’t be renewing his contract with Napoli, according to Sky Sports News.

Higuain has just come off the back of a sensational campaign that saw him score an incredible 36 goals in just 35 Serie A games for Napoli as they finished runners-up to eventual champions Juventus.

That stunning form has seen the Argentinean international attract interest from the Premier League with Sky Sports News claiming that Arsenal and Liverpool are among the clubs who’re keen on luring the striker to England this summer.

Arsene Wenger is on the look out for another striker after missing out on Jamie Vardy – who snubbed a move to Arsenal in favour of signing a new deal at Leicester – and the Gunners boss could now be ready to turn his attention to long-term target Higuain.

Jurgen Klopp has just completed the signing of Sadio Mane from Southampton but the media has still suggested that the Liverpool coach is keen on Higuain as he looks to build a squad capable of challenging for the title next season.

The English duo have now been boosted in their pursuit as the 28-year-old’s agent and brother, Nicolas Higuain, has now confirmed that the striker will not be extending his contract with Napoli – which expires in 2018.

“We arrived with a Champions League project, of being champions, of growing, and the response of the company was not the most correct.

“It’s their right to ask for his buyout clause, but we will opt for the path of not renewing the contract and he will be free in 2018.

“In these conditions we are going to respect the contract that we have with Napoli but we are not going to renew it under any circumstances. Gonzalo is super professional and will continue to give the maximum.”

Sky Sports claim that Higuain’s contract has a buyout clause worth £72m but I personally don’t think any club will agree to pay that kind of money, despite him being one of the most prolific striker’s in Europe.

By threatening to not sign an extension and run down the final two years of his deal, I think the agent is trying to pressurise Napoli into cashing in on Higuain as they know the Italian outfit won’t want to lose such a valuable asset for nothing. 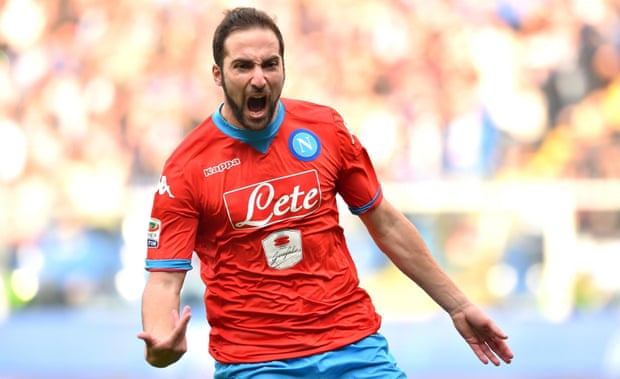 With Napoli unlikely to get the full value of Higuain’s buyout clause, it looks like the players agent is simply trying to force them to lower their asking price to a more realistic level that will attract more interest in his client.

If the Serie A outfit agree, then I wouldn’t be surprised to see the likes of Arsenal and Liverpool stepping up their interest and Higuain would be a sensational signing for either club if they were able to lure him to the Premier League.

Arsenal would arguably be favourites as they have more financial power and can offer Champions League football but there is always a question mark over whether Wenger will be prepared to spend the kind of money it would take to land a player like Higuain.

It’s going to be an interesting few months ahead but I’d personally love to see the South American hitman come to the Premier League this summer as he’d be a great addition to English football.