Arsenal take on Swansea at the Emirates on Saturday afternoon. Here is the side Gooner Mac thinks Arsene Wenger will select for the game:

Arsenal will look to continue their excellent recent form when they take on Swansea at the Emirates on Saturday afternoon. Here is the side Gooner Mac thinks Arsene Wenger will select for the game:

Goalkeeper: Petr Cech was back between the sticks for the 1-0 win at Burnley before the international break and he should keep his place ahead of David Ospina this weekend.

Defence: We have no fresh injury concerns to contend with so I see no reason why Wenger would want to change what has become a solid back four in recent weeks.

Shkodran Mustafi should therefore continue alongside Laurent Koscielny at the back with Nacho Monreal once again occupying the left-back position. Hector Bellerin is fit to start after recovering from a minor ankle knock which he picked up while playing for the Spanish under-21’s last week.

Midfield: Francis Coquelin is back in contention after recovering from a knee injury that he sustained against Chelsea last month but it remains to be seen whether Wenger will recall the Frenchman.

Granit Xhaka is likely to retain his place alongside Santi Cazorla in the middle of the park as the Swiss international has performed extremely well in recent games during Coquelin’s absence.

Aaron Ramsey remains unavailable for selection as he continues his recovery from a hamstring injury and the Welshman is also expected to miss Wednesday night’s Champions League clash with Ludogorets.

Attack: Olivier Giroud is also still out with a toe injury that has hampered him since the PSG game last month so Alexis Sanchez is once again set to lead the line up front after impressing in the role this season.

Theo Walcott couldn’t take his Arsenal form in to the international break with England but I still expect him to keep his place on the right with Alex Iwobi once again on the left.

Wenger confirmed that Mesut Ozil has declared himself fit and available for selection after his withdrawal at half-time during Germany’s 2-0 win over Northern Ireland on Tuesday sparked fears he’d picked up a knock. 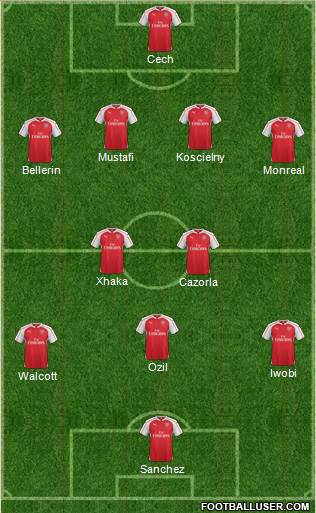