Tottenham take on West Brom at the Hawthorns on Saturday afternoon. Here is the side we think Mauricio Pochettino will select for the game:

Goalkeeper: Hugo Lloris is almost certain to continue between the sticks on Saturday as he’s a key figure in the Spurs line-up.

Defence: Pochettino said he has a few little niggles to keep a check on following the international games but he didn’t give any specific names so we’ll have to assume none of his regular back four are doubts for the trip to the Hawthorns.

Danny Rose and Kyle Walker came through the England game on Tuesday without issue so they should continue in the full back positions while Jan Vertonghen will continue alongside Belgian team mate Toby Alderweireld in the middle of defence.

Midfield: Pochettino has confirmed that Mousa Dembele will miss the game after aggravating a foot injury in training on the eve of the win over Manchester City two weeks ago. The midfielder sat out of Belgium’s World Cup qualifying double header and will now also miss the West Brom clash.

Eric Dier was only fit enough for a place on the substitutes bench last time out [against City] but he should come back in to the holding role in Pochettino’s new 4-1-4-1 formation with Victor Wanyama likely to drop out.

Dele Alli should retain his place in midfield alongside Moussa Sissoko while Christian Eriksen and Erik Lamela are expected to once again play on the wings.

Attack: Harry Kane continues to miss out with an ankle injury that’s kept him on the sidelines for the past four matches so Hueng-min Son is expected to keep his place up front ahead of Vincent Janssen having netted five goals in his last five games. 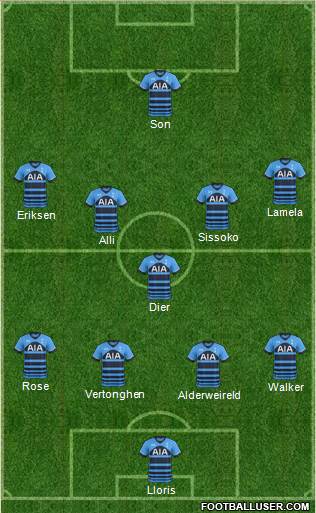