Liverpool entertain Manchester United at Anfield on Monday night so we thought we’d come up with our best attempt at a combined XI from the two squads.

Liverpool entertain fierce rivals Manchester United at Anfield on Monday night so we thought we’d come up with our best attempt at a combined XI from the two squads…..

I don’t think there can be any question marks about this one. Both Simon Mignolet and Loris Karius look suspect between the sticks while David De Gea is arguably one of the best keepers in the world.

Left-back has been a problem area for Liverpool in recent years and James Milner has been forced to fill-in as Alberto Moreno continues to prove he’s a liability in defence and the versatile England ace has performed extremely well. However, he’s not a specialist full-back and I think when Luke Shaw is fully fit, he has the edge over Milner.

The young Ivorian has settled in to life in England superbly following his summer move from Villarreal and he looks an absolute beast of a centre-back. Joel Matip has also done well for Liverpool having joined the club on a free transfer in the summer but Bailly deserves a place in the team.

The Croatian international has found a new lease of life under Jurgen Klopp and has become a permanent fixture at the heart of the Liverpool defence. A year ago Chris Smalling would probably have walked in to the team but he’s out of favour under Jose Mourinho so Lovren gets the nod.

This was a very tough call as Antonio Valencia and Nathaniel Clyne are very closely matched but I’m giving the Liverpool man the edge. Clyne has everything needed to be a top full-back and has finally found the consistency he needed following his move from Southampton.

Jordan Henderson has been Mr Consistent for Liverpool and was rewarded with the England captaincy last week. He works hard and is also capable of scoring the odd worly so he deserves his place in the team ahead of the likes of Marouane Fellaini or Ander Herrera.

His career at Old Trafford has started slowly following his world record move from Juventus but you can’t doubt his quality. The French international has everything you’d want in a top box-to-box midfield player and I have no doubts he’ll be a huge hit once he’s settled at United.

The Brazilian international has continued to prove why he’s one of Liverpool’s most important players. When he’s on form, Coutinho is almost unplayable and he’s got a knack of scoring important goals. There’s no way we could justify picking Anthony Martial ahead of him on current form.

Wayne Rooney’s impact at Man Utd has been slowly fading in recent years and it looks like he’s finally lost his first team place for club and country. His form has been poor this season while Roberto Firmino has been superb for Liverpool so he deserves a place in the team.

Sadio Mane has been in outstanding form since joining Liverpool from Southampton in the summer with his pace and directness causing opposition defences all sorts of problems. Marcus Rashford will feel unlucky to miss out as he’s also been excellent for United but Mane just edges him at the moment.

The mercurial Swede is still one of the best strikers in world football and there is no way we could leave him out. Despite recently turning 35, the former Barcelona hitman has still managed to adjust to life in the Premier League with ease and has scored 6 goals in 11 games for United so far.

So this is how our team looks on paper: 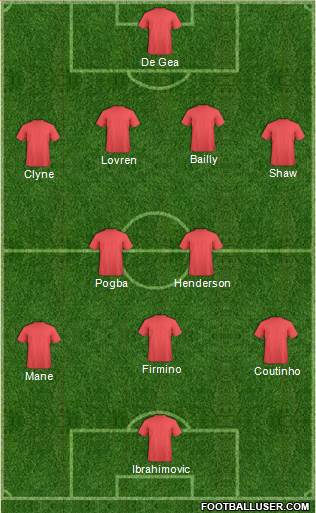