Arsenal entertain Southampton in the EFL Cup at the Emirates on Wednesday night. Here is the side Gooner Mac thinks Arsene Wenger will select for the game:

Arsenal will be looking to book their place in the semi finals of the EFL Cup when we entertain Southampton at the Emirates on Wednesday night.

Goalkeeper: Emi Martinez has been our League Cup keeper so far this seaosn and I expect that trend to continue with the yougnster starting between the sticks. Matt Macey should be on the bench giving Petr Cech and David Ospina a rest.

Defence: Wenger is expected to make wholesale changes to his side but with Hector Bellerin still out with an ankle injury and Mathieu Debuchy joining him on the sidelines with a hamstring problem we’re short of options at right-back.

Gabriel replaced Debuchy when he picked up his latest issue against Bournemouth at the weekend but I expect the Brazilian international will play in the middle tomorrow meaning Carl Jenkinson is likely to come back in.

Nacho Monreal, Laurent Koscielny and Shkodran Mustafi will be rested with Rob Holding and Kieran Gibbs expected to be handed starts.

Midfield: I liked the look of the Granit Xhaka-Mohamed Elneny pairing against Bournemouth but both should be rested for this game along with Aaron Ramsey – who was a late substitute at the weekend.

Francis Coquelin should get a recall and he’s likely to be joined by Ainsley Maitland-Niles as the youngster has started in the previous rounds of the League Cup and could be given another chance to impress tomorrow.

Attack: Alexis Sanchez, Theo Walcott and Mesut Ozil were among the first team regulars who trained today but I expect them to be rested while Olivier Giroud has been ruled out with a minor groin complaint.

Lucas Perez has been passed fit to return to the squad after recovering from an ankle injury which has kept him out for the last five weeks so with Chumba Akpom still out injured, I think we’ll see the Spaniard lead the line up front tomorrow.

Alex Oxlade-Chamberlain should get another run out on the wing and I expect we’ll see Alex Iwobi start in attack while youngster Jeff Reine-Adelaide is also expected to feature after starting in the previous rounds of the competition. 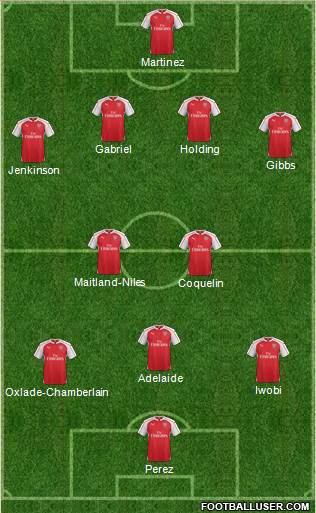