Arsenal take on title rivals Manchester City at the Etihad Stadium on Sunday afternoon. Here is the side I think Arsene Wenger will select for the game:

Arsenal will be looking to bounce back from our midweek disappointment when we take on title rivals Manchester City at the Etihad Stadium on Sunday afternoon.

Goalkeeper: Petr Cech is almost certain to keep his place between the sticks this weekend as he’s Arsenal’s first choice goalkeeper in the league so I expect to see David Ospina once again on the bench.

Defence: Shkodran Mustafi remains out with a hamstring injury so Gabriel is expected to continue alongside Laurent Koscielny in the middle of the back four on Sunday as Per Mertesacker is still not available despite returning to training following a serious knee injury.

Hector Bellerin made a successful return to the starting eleven during the midweek defeat at Everton so he’ll keep his place as long as he hasn’t suffered any sort of reaction. It will be interesting to see if Wenger might be tempted to recall Kieran Gibbs as Nacho Monreal was partially at fault for the Everton equaliser but I think we’ll probably see the Spaniard keep his place.

Midfield: Aaron Ramsey has once again been ruled out after failing to recover from a hamstring injury that’s kept him out of the last three games and with Santi Cazorla not expected back until February at the earliest, we don’t have too many options in midfield.

Granit Xhaka should be a certain starter as he’s added some much-needed control to our midfield and I expect Francis Coquelin to keep his place ahead of Mohamed Elneny alongside the Swiss international.

Attack: The big question is whether Wenger recalls Olivier Giroud to the starting eleven but I think this game is perfect for us to set-up on the counter-attack meaning we need pace in attack.

Therefore, Alexis Sanchez should keep his place through the middle with Alex Oxlade-Chamberlain and Theo Walcott offering speed on the wings, and with Mesut Ozil supplying the passes, we have the potential to really hurt City on the break if we utilise our abilities properly.

Giroud will be a very useful weapon to have from the bench in the second half if we need a ‘Plan B’ while Alex Iwobi will also be an option if the boss needs to mix things up. 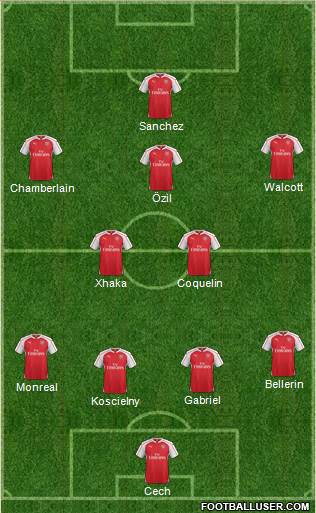