Manchester City take on Arsenal at the Etihad Stadium on Sunday afternoon. Here is the side we think Pep Guardiola will select for the game:

Manchester City take on Arsenal at the Etihad Stadium on Sunday afternoon in a huge top-of-the-table clash. Here is the side we think Pep Guardiola will select for the game:

Goalkeeper: Claudio Bravo has come under plenty of criticism this season since joining City from Barcelona but he’s Guardiola’s No.1 and is expected to start once again on Sunday.

Defence: Vincent Kompany has been ruled out with an on-going knee injury which has hampered him in recent weeks but John Stones could get a recall in defence after being left out against Watford in midweek.

Alexandre Koralov is the man likely to make way with Nicolas Otamendi keeping his place in the middle of defence while Bacary Sagna could come in to start against his old club with Pablo Zabaleta dropping out. Gael Clichy should keep his place at left-back.

Midfield: Ilkay Gundogan has been cruelly ruled out for the rest of the season after suffering a serious knee ligament injury in midweek so Fernando is expected to come in to the midfield.

Fernandinho serves the final of his three-game ban following his sending off against Chelsea while Fabien Delph remains out injured so Yaya Toure should keep his place in the middle of the park this weekend.

Attack: Sergio Ageuro serves the third of his four-game ban so Guardiola has a huge void to fill up front. Nolito started against Watford on Wednesday night and while Kelechi Iheanacho is an option, I think the City boss will stick with the more experienced Spanish international.

Raheem Sterling and David Silva should keep their places and join Kevin De Bruyne in a dangerous attack which will support Nolito so the Arsenal defence will still have plenty to worry about even with Aguero on the sidelines. 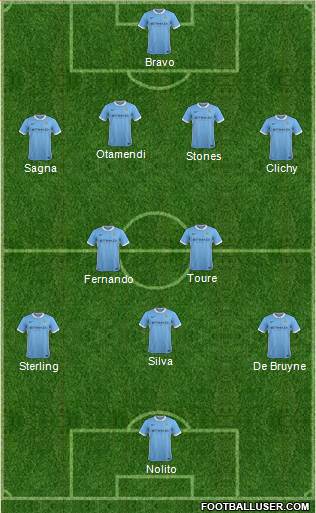