Arsenal will be looking to keep the pressure on Chelsea when Watford arrive at the Emirates on Tuesday night. Here is the side I think Wenger will select

Arsenal will be looking to keep the pressure on Premier League leaders Chelsea with a win when Watford arrive at the Emirates on Tuesday night.

Goalkeeper: David Ospina started during our FA Cup win over Southampton at the weekend but the Colombian is expected to make way with Petr Cech returning in goal tomorrow.

Defence: After winning 5-0 it’s going to be difficult for the boss to justify making too many changes but I still think we’ll see a number of first team regulars getting recalls against Watford.

Rob Holding was impressive at the weekend but Laurent Koscielny should come back in to the side to partner Shkodran Mustafi in the middle of defence while Nacho Monreal is expected to resume his role at left-back with Kieran Gibbs dropping out.

Hector Bellerin made a successful comeback against Southampton so he’ll be favourite to keep the right-back berth despite Gabriel impressing during his absence.

Midfield: Alex Oxlade-Chamberlain was excellent in the central midfield role at the weekend but sadly I don’t think we’ll see him keep his place as Wenger is likely to revert to Aaron Ramsey alongside Francis Coquelin tomorrow.

Granit Xhaka continues to serve his four-game suspension following his dismissal against Burnley while Santi Cazorla is still injured. Mohamed Elneny has picked up a calf problem while away at the Africa Cup of Nations but it isn’t thought to be too serious.

Attack: Alexis Sanchez and Mesut Ozil are certain to get recalls to the starting eleven which means that Jeff Reine-Adelaide will drop out along with the unfortunate Lucas Perez – who put in a fine display at the weekend.

Danny Welbeck is also pushing to keep his place after scoring a superb brace at St Mary’s but Wenger hinted at his press conference this morning that the striker still isn’t 100% fit and isn’t ready to start twice in three days.

Therefore I think we’ll see Olivier Giroud recalled up front but Theo Walcott could keep his place on the right-wing after scoring a hat-trick at the weekend. Alex Iwobi is the man who’ll miss out. 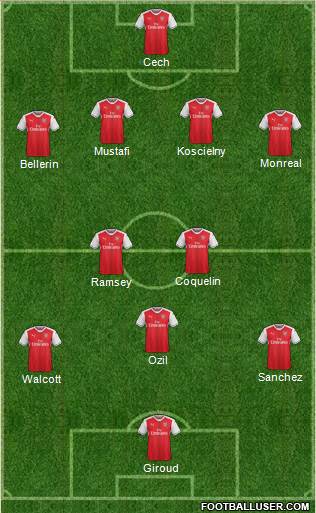 If watching the likes of Chelsea, Tottenham Hotspur and Arsenal battling for the title has whetted your appetite, why not grab your mates and a ball and get down to your local Goals arena to see if you can unleash your inner Sanchez?