Liverpool will be looking to close the gap on Chelsea with a win when they host the leaders at Anfield tomorrow. Here is the side I think Klopp will select

Liverpool will be looking to close the gap on Chelsea with a win when they welcome the Premier League leaders to Anfield on Tuesday night. Here is the side I think Jurgen Klopp will select for the game:

Goalkeeper: The Reds boss has stuck with Loris Karius in the domestic cup competitions but I think we’ll see Simon Mignolet coming back in between the sticks for this huge league game.

Defence: Nathaniel Clyne remains a doubt as he’s still unable to train after missing the last two games with a rib injury so Trent Alexander-Arnold should start at right-back tomorrow if the England man misses out.

James Milner will come back in for Alberto Moreno at left-back while I fully expect Joel Matip and Dejan Lovren to be the centre-backs with Joe Gomez and Ragnar Kalvan dropping out.

Midfield: Klopp is expected to make plenty of changes to the side that crashed out of the FA Cup to Wolves so Jordan Henderson will replace Lucas Leiva in the holding role while Erme Can could come in for Gini Wijnaldum.

The good news for Reds fans is that Adam Lalllana is back in contention after returning to training having missed the FA Cup game with a nasty cut which he sustained last week.

Attack: Klopp confirmed at his press conference earlier that Sadio Mane’s return from the African Cup of Nations has been delayed as the attacker is now not due to land on Merseyside until tonight so he’ll be assessed at Melwood tomorrow morning. The best he can realistically hope for is a place on the bench.

Philippe Coutinho will join Roberto Firmino in attack after being a second half substitute at the weekend and Klopp has a big decision to make over who joins the Brazilian’s in the front three.

Daniel Sturridge has been criticised for his performances lately but I still think he’ll get the nod ahead of Divock Origi against Chelsea tomorrow. 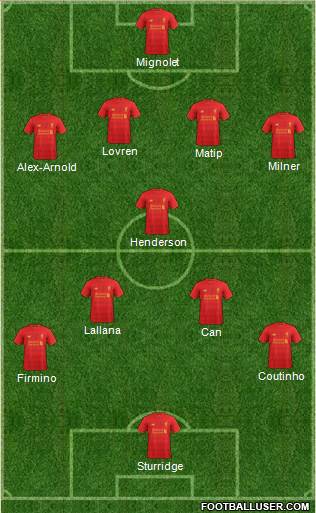 If watching the likes of Chelsea, Tottenham Hotspur and Liverpool battling for the title has whetted your appetite, why not grab your mates and a ball and get down to your local Goals arena to see if you can unleash your inner Coutinho?