Premier League leaders Chelsea take on Liverpool at Anfield on Tuesday night. Here is the team we think Antonio Conte will pick for the game:

Chelsea will be looking tighten their grip at the top of the Premier League table when they take on Liverpool at Anfield on Tuesday night.

Goalkeeper: Asmir Begovic kept goal for the FA Cup fourth round win over Brentford on Saturday but the Bosnian will make way for number one Thibaut Courtois tomorrow night.

Defence: The Blues boss is expected to make plenty of changes from the side that played at the weekend with a number of first team regulars set to come back in.

David Luiz and Gary Cahill will get recalls at the back meaning John Terry and Kurt Zouma will drop out while Cesar Azpilicueta should keep his place in the back three.

Midfield: Conte has no fresh injury worries to contend with so we should see N’Golo Kante and Nemanja Matic given recalls in the middle of the park after being rested on Saturday. This would see Cesc Fabregas and Nathan Chalobah drop out.

Victor Moses and Marcos Alonso are also pushing to come back in to the starting eleven after also being given a breather at the weekend with Nathan Ake among those missing out.

Attack: Eden Hazard will get a recall after being left out against Brentford while Diego Costa should also come back in to lead the line up front against Liverpool. Michy Batshuayi will therefore drop to the bench despite getting himself on the scoresheet at the weekend.

Conte has a decision to make over who to fill the final spot in attack but I think we’ll see Pedro given the nod ahead of Willian after the Spaniard continued his fine run of form with another goal on Saturday. 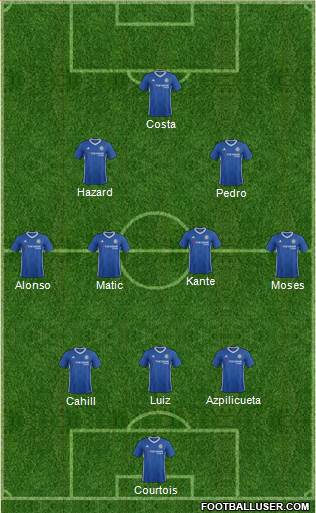 If watching the likes of Chelsea, Tottenham Hotspur and Liverpool battling for the title has whetted your appetite, why not grab your mates and a ball and get down to your local Goals arena to see if you can unleash your inner Hazard?