Manchester City take on Manchester United at the Etihad Stadium tomorrow night. Here is the side I think Pep Guardiola will select for the game:

Manchester City will look to cement their position in the top four when they take on Manchester United at the Etihad Stadium tomorrow night.

Goalkeeper: Claudio Bravo has been back in favour in recent weeks and started in the FA Cup semi-final defeat to Arsenal at the weekend so he’s favourite to start between the sticks tomorrow night.

Defence: John Stones is set to once again miss out but Vincent Kompany has come through two games in a row so should be fit to start alongside Nicolas Otamendi against United.

Gael Clichy is likely to keep his place at left-back but Guardiola may opt to bring in the experience of Pablo Zabaleta at right-back with Jesus Navas dropping out following a spell in the unfamiliar position.

Midfield: Fernandinho is almost certain to be deployed in the holding role once again with Yaya Toure likely to keep his place in midfield along with Kevin De Bruyne.

Fabian Delph and Fernando are other options for Guardiola is he wants to be more defensive but City need to win this game to tighten their grip on the top four.

Attack: David Silva is a major doubt after being forced off with a hamstring injury at Wembley on Sunday and while Guardiola says the playmaker will be assessed, he’s unlikely to be risked against United.

Therefore, Raheem Sterling is set to be recalled after being a substitute against Arsenal at the weekend while Leroy Sane should keep his place in attack.

Gabriel Jesus has been declared ‘ready’ to make his return but the Brazilian isn’t expected to start after being out for several weeks with a broke foot so a place on the bench is the best he can realistically hope for.

Guardiola also confirmed at his press conference earlier that Sergio Aguero is fit and available for selection despite picking up a minor knock at the weekend so he should continue up front. 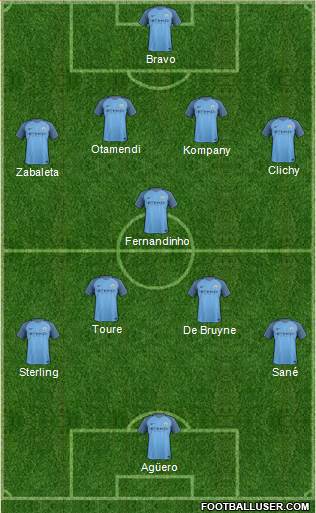