Marouane Fellaini was sent off for headbutting Sergio Aguero as Manchester United held Manchester City to a 0-0 draw at the Etihad Stadium this evening. 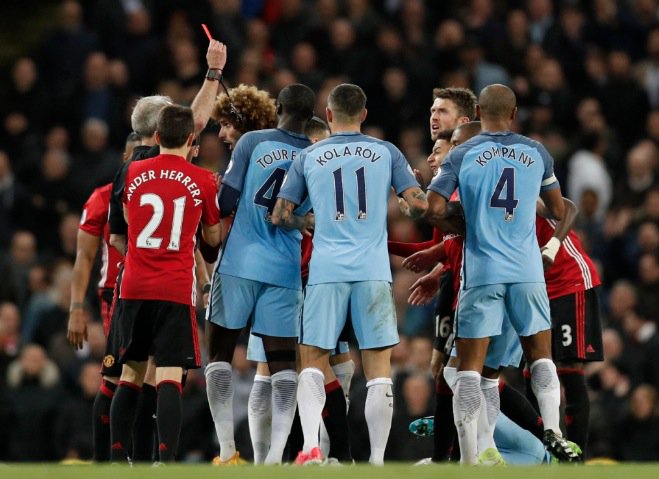 Marouane Fellaini was sent off for headbutting Sergio Aguero as Manchester United held Manchester City to a 0-0 draw at the Etihad Stadium this evening.

City started the brighter of the two sides and should have taken an early lead when Aguero hit the outside of the post from close range in the 8th minute.

Ander Herrera went close for United shortly before half time as he sent a far post header wide of target but it was City who continued to dominate possession after the break.

The games big talking point came with eight minutes remaining as Fellaini was first booked for a foul on Aguero and then seconds later he was pulled up for another trip on the City striker. The two players squared up and Fellaini stupidly headbutted the Argentinean striker and gave the referee little option but to show him a straight red card.

United played out the rest of the game with 10-men and the closest we came to a winner was Gabriel Jesus seeing a goal correctly ruled out for offside as the game finished 0-0.

The result means City remain fourth in the table – one point above United and one behind third-placed Liverpool – so the race for the top four couldn’t be tighter.