Liverpool welcome Arsenal to Anfield on Sunday afternoon. Here is the side I think Jurgen Klopp will select for the game:

Liverpool will look to make an early statement in the Premier League title race when they welcome Arsenal to Anfield on Sunday afternoon.

Goalkeeper: Simon Mignolet is almost certain to keep his place between the sticks as he’s Klopp’s established first choice goalkeeper so Loris Karius will be named among the substitutes.

Defence: Klopp confirmed at his press conference earlier today that Trent Alexander-Arnold is expected to recover from a dead leg so he should keep his place at right-back in the absence of Nathaniel Clyne – who’s still nursing a hamstring injury.

Dejan Lovren was rested for the 1-0 victory over Crystal Palace last weekend ahead of Liverpool’s Champions League clash with Hoffenheim but I expect he’ll be retained on Sunday alongside Joel Matip.

Andrew Robertson performed well against Palace so we could see Alberto Moreno make way with the young Scottish international coming back in at left-back.

Midfield: Emre Can is a slight doubt with a twisted ankle so James Milner could come back in to the midfield but Adam Lallana remains on the sidelines with a thigh injury.

Gini Wijnaldum has flown back to Holland for the birth of his third child but the midfielder is expected to be back in time to take his place in the starting eleven alongside Jordan Henderson.

Attack: Liverpool will continue to be without Philippe Coutinho due to an apparent back injury as speculation linking him with a move to Barcelona rumbles on.

Daniel Sturridge came in for the game against Palace last weekend but I don’t think Klopp will change what has become a lethal attacking trio for the club so far this season.

Therefore, Mohamed Salah should start alongside Sadio Mane with Roberto Firmino once again leading the line up front and Sturridge on the bench. 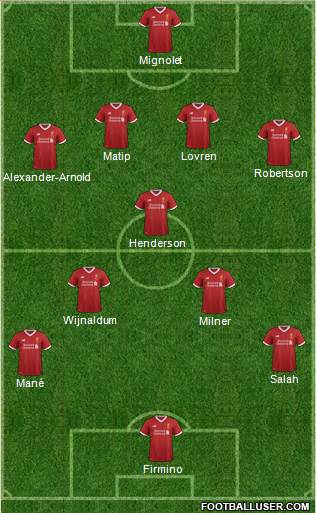