“You’re Not Fit To Wear The Shirt” – A Total Disgrace 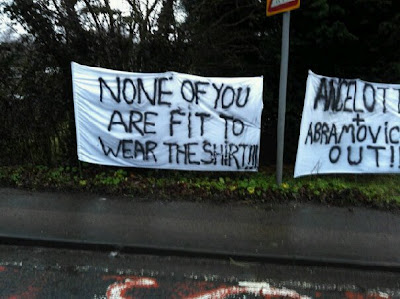 The two banners put up in Cobham today, in my view, is an absolute disgrace to the club and the fans. Today this banner had appeared because of our poor run in the last view months, but this is a sport and win & loss are part of it. First of all, we fans should be true fans, not mere glory hunters or plastic fans. Just because we are facing a worst run of a decade doesn’t mean we have to chop up things. I want the person who put up this banner to realize that If not for Roman Abramovich, we are not who we are now. We rank second in the UEFA Coefficient table, equal with United and 0.6 points behind Real Madrid. Who brought us to this position? Who helped us win 3 titles after 50+ years of League Title drought? Under whose ownership we won our first historic double in our 105 years of history? If not for Roman Abramovich and his passion towards Chelsea, nothing if the above could have been achieved.

I’m one of those who has criticized Roman for his handling of club but I don’t doubt his passion for the club. We criticize some of his decisions but we don’t insult him. In fact we Chelsea fans should be thankful to him. He has been a great owner for us, compare with the highly indebt Glazers and the previous American owners of Liverpool, both despite having ‘so called’ proud history, suffered and is suffering under their owners, while our dear Abramovich is washing out our club debts from his personal fortune. Criticize Roman’s decisions – we welcome, it’ll help Roman to correct but don’t insult him, that’ll be the nastiest thing a True Blue could do. At some point we should be thankful for the owner, because Roman has always been more than an owner – a fan of Chelsea himself. Of course like all human he too had made a few mistakes but we cannot insult his love and passion towards the club because of that. Indeed like any other fan, he too is disappointed when Chelsea lose. The major mistake he made is sacking Jose (indeed forcing Jose to quit) – it is a bitter mistake but see the merits, Chelsea’s player salaries are much higher than of United, Arsenal or Spurs, yet we are still a debt free club. If not for Sheik’s City, Roman has spent more in the transfer market in the past 7 years. After doing so much for Chelsea, what he get’s at last is such a disgraceful banner from a Fan! Nothing but absolute shame! 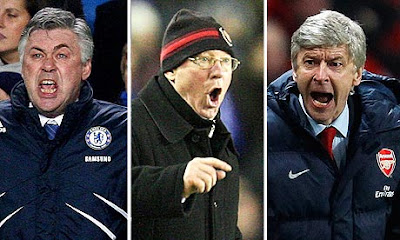 Ancelotti out? – The fan should be at his zenith of insanity. Where was he when Ancelotti won the double last season? If you can celebrate a victory, why can’t you accept a poor run? Do you want to win always? then you are not a football fan but a glory hunter – a plastic fan! Ancelotti is one of the very few who won the League in their first season. Even Ferguson or Arsene couldn’t do that. Ferguson finished 11th in his first season at United, in the second season he finished Second but against in the next season he finished 11th and the next season was a disaster for him, and the fans put up a banner “Three years of excuses and it’s still crap. Ta ra Fergie.”, what do you think the state of United would have been has the board sacked him then? It took Ferguson 5 years to win his first title, despite making many ‘big’ signings in the previous seasons. Success is a long process and sustainable success is an even longer process, without patience and devotion it is impossible to attain sustainable success. Why can’t our fans be patient? It’s hard, we get irritated and depressed but isn’t it all part of life? Didn’t we wait for 3 years to win the title for the 3rd time in the Abramovich era? Why can’t we accept defeats now? Yes, they are bad, but isn’t it our club? Will you dispose your injured child because he is injured or will you support him to get him back to condition? For me supporting Chelsea is a passion and not a commodity you trade according to the merits.

Then why are we failing? Rather comparing the first team in the matches, I compare the benches and we are having one of the weakest bench in the league. No disrespect to the youngsters but we need match winners or people who are able to turn situations in the bench when the first team players are not doing good. For example, when Drogba or Anelka is failing we need another player of the same level to step up. Unfortunately we don’t have that sort of quality in the bench. Last season we had experienced legs like Deco, Ballack, Cavarlho, Belletti and Joe Cole in the bench, this season we are missing them. Ballack use to be a starting player for us and we suddenly let him go after a successful season. Yes, he is old but has we brought in good replacements then no harm letting him go but we failed to do that. I am not a fan of Belletti but at times when subbed in he has put some good performances.

I don’t see Ramires & Benyoun as good replacements for Ballack, Joe Cole and Deco. Neither of them match the quality and experience of Ballack. So this is where we slipped this season. We have great youngsters, they show flashes of talent but that is not enough to win matches. Foe example, when Chamakh, Arshavin and Nasri start for Arsenal they have players like Van Persie and Walcott in the bench, we don’t have that quality. City is doing well because they have a great team and a great bench. If Rafael Da Silva is starting for United this season, he was in the squad and bench for 3 years now and just now getting serious opportunities, thus you don’t expect youngsters to step in as soon as they start training with the first team. Unfortunately we didn’t have managerial consistency, so we could build a consistent and sustainable team. So let us give Ancelotti some time, let him even take a couple of seasons. Had the United Fans & Board not been patient in the Ferguson’s first 5 years, they wouldn’t have won 35 trophies in the next 19 years including 11 EPL Titles and 2 Champions League. So no harm in giving Ancelotti some time.

Some fans scream ‘Bring Back Jose!’ – well Jose Mourinho is a Chelsea Legend, the man who changed Chelsea into Champions, I’m a big fan of him but Jose’s chapter with Chelsea is a closed one, it is a great and massively successful chapter but that’s finished, we have to move on. Thus, it’s pointless dreaming about Jose back at Chelsea. Let us support Ancelotti, who achieved what even Jose couldn’t achieve, the historic double! I’m sure Ancelotti can bring great success to Chelsea. Let’s be patient and Let’s give Ancelotti some time and space to breath! Let’s not get involved in disgraceful balderdash.

What about ‘none of you are fit to wear the shirt’? well they are high profile players, they get paid in millions but after all they are humans. Same players playing over and over again, injuries plaguing them, even players playing with injuries, all because of lack of back up players, so can’t fully blame them for not performing. Yes, most of the players haven’t done well, some have been a disaster but aren’t they the same players won the double last season? so declaring them unworthy to wear the shirt is unfair. They had been sloppy, we’ve booed them, they understand the shame and hope they are trying, so let’s better back them when they play instead of cursing them.