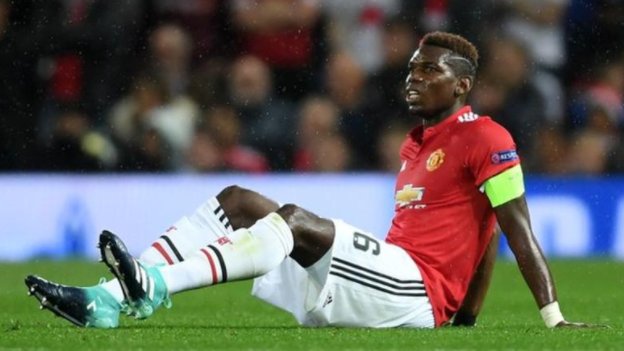 Manchester United midfielder Paul Pogba is set to miss their crunch clash with Liverpool after being ruled out for up to six weeks with a hamstring injury, according to the BBC.

Pogba captained the United team for the first time as he led the Red Devils out for their Champions League group stage opener against FC Basel on Tuesday night.

However, the 24-year-old limped off inside the opening 20 minutes after picking up a hamstring injury and was seen leaving Old Trafford on crutches after the comfortable 3-0 win.

The French international was sent for scans on Wednesday to determine the full extent of the injury and the BBC claim the results show the midfielder will miss between 4-6 weeks.

It means Pogba will miss upcoming Premier League games against Everton, Southampton and Crystal Palace while he’s also set to miss the crucial trip to Anfield to face Liverpool on October 14th.

The former Juventus star will also sit out next Wednesday’s League Cup third-round tie with Burton as well as the Champions League trip to CSKA Moscow later this month.

Fortunately for United there is an international break at the start of October but if Pogba is out for the full six weeks, then he’ll also miss further games against Benfica and Huddersfield.

The news will come as a major blow to United as they look to continue their excellent early-season form, however, Jose Mourinho feels they have enough quality to cope without Pogba with Ander Herrera, Marouane Fellaini and Michael Carrick all ready to step-in.