Arsenal have been dealt a major injury blow as Shkodran Mustafi picked up a serious hamstring injury while playing for Germany last night. 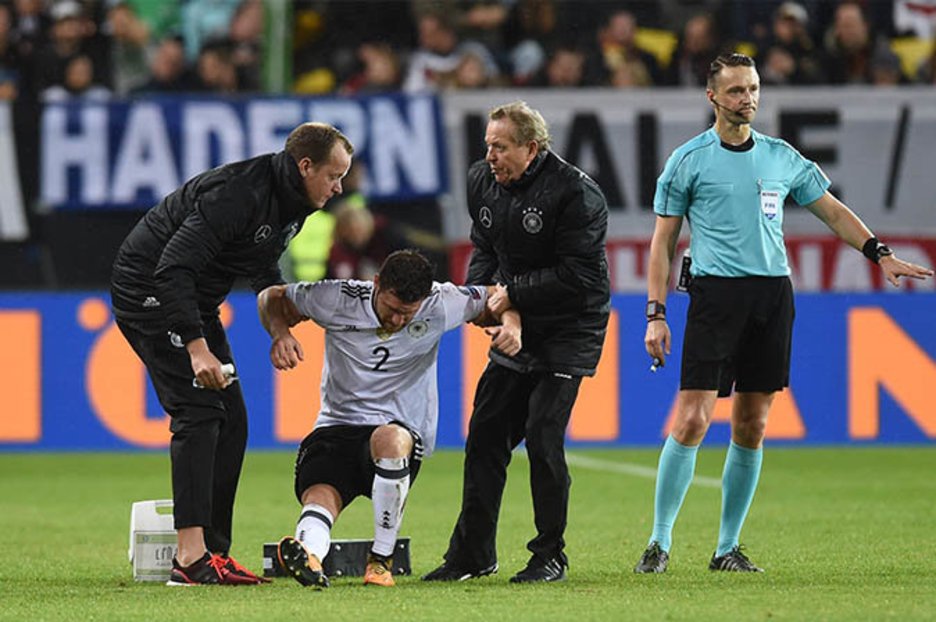 Arsenal have been dealt a major injury blow as Shkodran Mustafi looks set for an extended spell on the sidelines after picking up a serious hamstring injury while playing for Germany last night.

Mustafi started for his country during their World Cup qualifier against Azerbaijan in Kaiserslautern but was forced off in the first half after suffering a suspected hamstring tear.

The Arsenal defender was running alongside Ramil Sheydaev when he pulled up suddenly allowing the Azerbaijan attacker to score a famous goal against the world champions in the 34th minute.

After receiving treatment from the medical staff, Mustafi eventually limped off to be replaced by Matthias Ginter as Germany went on to win the qualifier 5-1 thanks largely to a brace from Leon Goretzka.

Speaking after the game, coach Joachim Low confirmed that Mustafi appears to have suffered a serious hamstring injury that’s expected to keep him out for a ‘long time’.

Low is quoted as saying by the Independent:

“I think Mustafi has a muscle tear. It looks a bit more serious. A hamstring injury to a muscle tear, we have to wait for the exact diagnosis, but he’ll probably be out for a long time.”

The news will come as a big concern to Arsenal as Mustafi has started five of our seven Premier League games so far and was getting back to his best form before picking up this untimely injury.

The centre-back will now return to north London to undergo further scans with Arsenal but if a muscle tear is confirmed then Mustafi could be facing months on the sidelines.

Even if the diagnosis is positive and he’s only suffered a basic hamstring injury then he’d still be ruled out for around three weeks so it looks like we’ll be without our £36m signing for the foreseeable future.

It means Mustafi is almost certain to miss upcoming games against Watford, Red Star Belgrade, Everton, Norwich and Swansea City while he’s also in danger of missing further matches with Manchester City and Tottenham next month.

It will be interesting to see who Arsene Wenger selects to replace Mustafi but Per Mertesacker is arguably the favourite ahead of Rob Holding to line-up alongside Laurent Koscielny and Nacho Monreal this weekend.