Tottenham take on Real Madrid at Wembley on Wednesday night. Here is the side we think Mauricio Pochettino will select for the game:

Tottenham will look to book their place in the knockout stages of the Champions League when they take on Real Madrid at Wembley on Wednesday night.

Goalkeeper: Hugo Lloris is almost certain to start between the sticks and he’ll be looking to impress again after starring during the 1-1 draw at the Bernabeu.

Defence: Danny Rose is pushing for a recall as he looks to build on his match fitness after recently returning from a serious knee injury so Ben Davies may make way tomorrow night.

Kieran Trippier could also be in-line for a start on the right with Serge Aurier dropping out after playing against Manchester United at the weekend.

I expect Pochettino will play three at the back against Madrid with Davinson Sanchez set to come back in alongside Jan Vertonghen and Toby Alderweireld after being dropped at Old Trafford.

Midfield: Mousa Dembele was only on the bench against United so he could get a recall in midfield. Harry Winks may be the man to make way while Moussa Sissoko could also be a victim of the formation switch.

Victor Wanyama is still struggling to overcome a niggling knee injury and is due to see a specialist again this week so Eric Dier is expected to once again start in the holding role.

Attack: Tottenham were boosted by the news that Harry Kane was able to take part in training today after missing the last two matches with a hamstring injury.

Pochettino said at his press conference earlier today that he was confident Kane would be available but he’ll make a late decision over his involvement, so I think we could see the England international leading the line up front.

That would see Hueng-min Son make way as Dele Alli and Christian Eriksen should keep their places while Fernando Llorente would also have to make-do with a place on the bench.

Erik Lamela is edging closer to making his return from a long-term hip injury so we may even see him named among the subs. 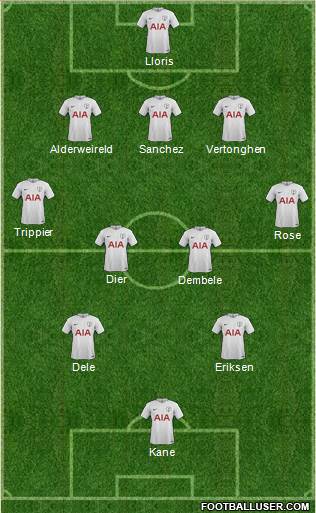