Arsenal take on Nottingham Forest at the City Ground on Sunday afternoon. Here is the side Gooner Mac thinks Arsene Wenger will select for the game:

Arsenal will be looking to book their place in the fourth round of the FA Cup when we take on Nottingham Forest at the City Ground on Sunday afternoon.

Goalkeeper: Petr Cech is expected to get a rest with David Ospina coming in between the sticks as the Colombian international has been our first choice keeper in the other cup competitions.

Defence: Wenger has confirmed he plans to rotate on Sunday but his options at the back are limited as Laurent Koscielny remains on the sidelines with an Achilles injury while Nacho Monreal is still nursing an ankle problem.

Per Mertesacker is likely to come in and if Wenger sticks with a back three then we could see Mathieu Debuchy playing on the right side of the trio as the boss will need to rest two of our centre-backs for the Chelsea game.

Shkodran Mustafi will be one to drop out while Calum Chambers seems to be just ahead of Rob Holding in the pecking order, despite his horror show against Chelsea, so he might be rested with Holding starting in the FA Cup tie.

Midfield: Sead Kolasinac is out for two weeks with an ankle injury so it will be interesting to see if Wenger risks Ainsley Maitland-Niles or gives one of the other youngsters a chance in the left wing-back role.

Hector Bellerin should be rested so youngster Reiss Nelson could be given another chance to impress in the right wing-back role – even though his preferred position is further forward.

Aaron Ramsey remains out with a hamstring injury and Granit Xhaka has been ruled out with a groin problem so Jack Wilshere is almost certainly going to be rested this weekend after starting our last six games. Therefore, I expect we’ll see Francis Coquelin and Mohamed Elneny come in to the midfield.

Attack: Mesut Ozil and Alexis Sanchez are expected to be rested while Alexandre Lacazette should also be given a breather after starting throughout the festive period.

Olivier Giroud remains out with a hamstring injury so Danny Welbeck could be given a chance through the middle while Alex Iwobi is expected to be handed a start in attack.

Theo Walcott has been linked with a move away this month after struggling to force his way in to Wenger’s plans but he could be given a run-out in attack this weekend. 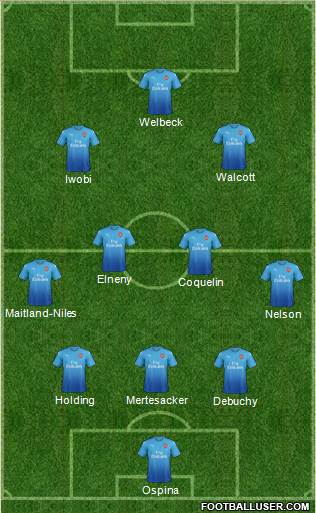