Manchester United take on Tottenham at Wembley on Wednesday night. Here is the team I think Jose Mourinho will pick for the game:

Manchester United will look to cement their position in second place when they take on Tottenham at Wembley on Wednesday night.

Goalkeeper: David De Gea is expected to be recalled after being rested for the FA Cup win over Yeovil Town so Sergio Romero will make way.

Defence: Mourinho is set to make wholesale changes to his defence with Matteo Darmian, Victor Lindelof, Marcos Rojo and Luke Shaw all expected to drop out after starting in the FA Cup.

Antonio Valencia will return to skipper the side at right-back with Ashley Young recalled at left-back. Chris Smalling and Phil Jones should come back in to the side in the heart of defence with Eric Bailly still recovering from ankle surgery.

Midfield: There will be changes in midfield too as Nemanja Matic should be given a recall along with Paul Pogba meaning Ander Herrera and Michael Carrick will make way following rare starts on Friday night.

Scott McTominay will also drop out while Marouane Fellaini could return to the bench after returning to full fitness.

Attack: Alexis Sanchez made an impressive start to life at United after making his debut against Yeovil so he could be the only survivor from the side that won in the cup with the Chilean international keeping his place in attack.

Jesse Lingard is expected to be recalled and he’ll be looking to continue his excellent recent form while Anthony Martial is also set to come in to the right side of the attack after being rested last time out.

Juan Mata and Marcus Rashford will make way while Romelu Lukaku should get a recall to start up front after being given a rest at Yeovil Town. 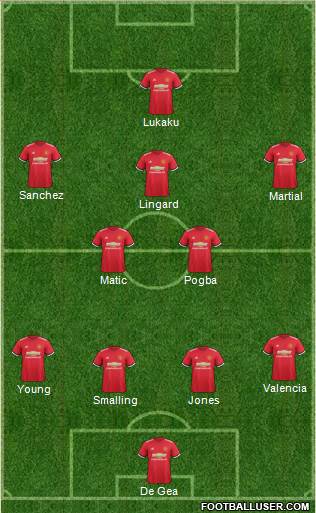