Tottenham take on Manchester United at Wembley tomorrow evening. Here is the side we think Mauricio Pochettino will select for the game:

Tottenham will be looking to close-in on the top four when they take on Manchester United at Wembley tomorrow evening.

Goalkeeper: Hugo Lloris is set for a recall after missing the last two games with illness so Michel Vorm should drop to the bench.

Defence: Danny Rose is back in contention after recovering from a knee injury but he’s lacking match fitness having been out for over a month so I think Ben Davies will come in at left-back after being rested at the weekend.

Serge Aurier is once again ruled out through injury so Kieran Trippier should keep his place on the right while Davinson Sanchez is set to get a recall in defence alongside Jan Vertonghen with Juan Foyth dropping to the bench.

Toby Alderweireld is back in full training but he’s still not considered ready to return to first team duty after missing the last 18 matches with a hamstring injury.

Midfield: Mousa Dembele could keep his place in midfield alongside Eric Dier with Victor Wanyama having to drop back to the bench after starting against Newport County at the weekend.

Harry Winks remains out with an on-going ankle injury that’s hampered him over the past month.

Attack: Fernando Llorente is set to make way after another average performance during the draw at Newport so Harry Kane should be the lone striker up front.

Christian Eriksen is expected to go straight in to the starting eleven after recovering from illness that kept him out of action at the weekend while Dele Alli is also set for a recall after being rested.

Erik Lamela is back in contention after recovering from a buttock injury but the Argentinean international will have to make-do with a place on the bench as Heung-min Son should start in attack. 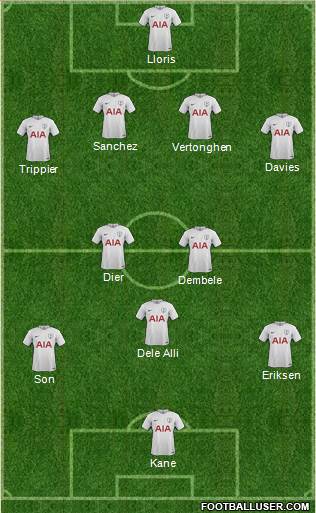