Olivier Giroud has completed his £18m move to Chelsea from Arsenal with the striker signing an initial 18-month contract at Stamford Bridge.

The January transfer window closes tonight so clubs are working hard trying to get last minute deals over the line and put deals in place for the summer. Today, Olivier Giroud has joined Chelsea… Olivier Giroud has completed his £18m move to Chelsea from Arsenal with the striker signing an initial 18-month contract at Stamford Bridge.

Giroud has been with Arsenal since joining the club from Montpellier in 2012 and he’s proven to be a superb signing for the north Londoners having provided 105 goals and 41 assists in 253 games.

However, the 31-year-old has lost his first team place this season following the arrival of Alexandre Lacazette and he’s been restricted to starting in the cup competitions.

Giroud was set to fall even further down the pecking order after the Gunners wrapped-up the signing of Pierre-Emerick Aubameyang so he’s decided to leave the Emirates in search of more regular first team football.

Chelsea emerged as front runners for his signature after Antonio Conte identified a new target-man as a priority this month and the Blues turned their attention to Giroud after failing to land Edin Dzeko.

Giroud was spotted arriving in west London earlier today to finalise terms and complete his medical after a deal was finally agreed with Arsenal.

The move has now been completed with Chelsea announcing on Chelseafc.com that Giroud has joined the club on an 18-month deal with the option of a further year and he’ll wear the number 18 shirt.

‘Chelsea is one of the biggest teams in the Premier League. They have won maybe the most trophies in the last six or seven years. It’s a massive club and I am proud to sign for Chelsea, and I’m looking forward to playing.’

No details have been announced over the fee but the Mirror claims Chelsea have paid Arsenal £18m, which may involved the Blues paying around £15m up front with a further £3m in add-ons. 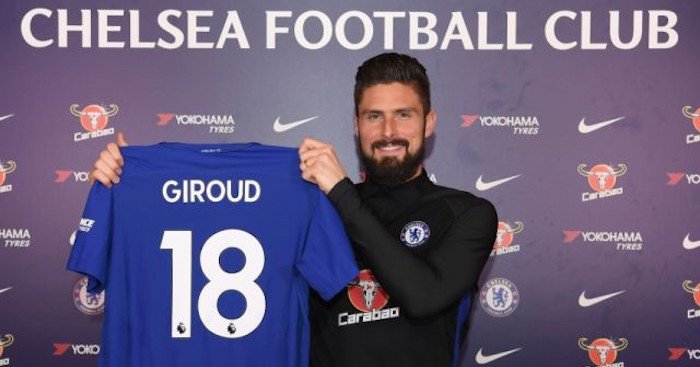