Arsenal head to St James’ Park to take on Newcastle United on Sunday afternoon. Here is the side I think Arsene Wenger will select for the game:

Arsenal will put their Europa League exploits to one side when we head to St James’ Park to take on Newcastle United on Sunday afternoon.

Goalkeeper: Petr Cech made another costly mistake during the draw at CSKA Moscow on Thursday night but with David Ospina still out with an ankle injury the Czech legend will continue in goal tomorrow.

Defence: Wenger has been resting Laurent Koscielny in our recent league games and I think he’ll do so again tomorrow so Calum Chambers could come in alongside Shkodran Mustafi.

Hector Bellerin is expected to continue at right-back but we may see Nacho Monreal rested with Sead Kolasinac given a run-out at left-back.

Midfield: Aaron Ramsey grabbed another goal against CSKA Moscow on Thursday night but he picked up a nasty cut to his leg and I don’t think he’ll be risked against Newcastle.

Mohamed Elneny was excellent in midweek as he produced one of his best performances of the season and I expect him to keep his place while Granit Xhaka should return from flu.

However, Jack Wilshere may make way after another frustrating game against CSKA and it really does look like his contract situation is affecting his performances on the pitch.

Attack: Pierre-Emerick Aubameyang is set for a recall after being ineligible to play in Europe and the Gabon international will be hoping to continue his fine goal-scoring form since joining the club in January.

Alexandre Lacazette is likely to get a rest with Danny Welbeck keeping his place in attack as he’s hit a purple patch of form with three goals in his last two outings.

Mesut Ozil is likely to start as we have 11 days until the first leg of our Europa League semi final with Atletico Madrid and we need his creativity in the final third tomorrow.

Henrikh Mkhitaryan has been ruled out for at least another two weeks with a knee ligament injury so Alex Iwobi could start in attack ahead of youngster Reiss Nelson – who made his Premier League debut last weekend. 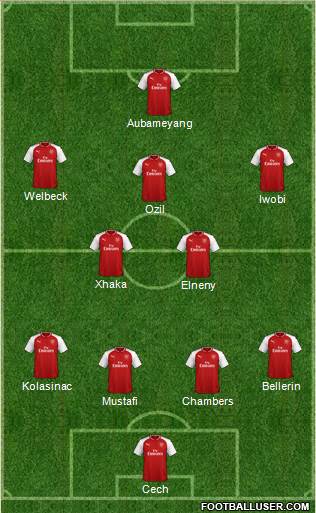