Arsenal take on Atletico Madrid at the Emirates on Thursday night. Here is the side I think Wenger will select for the game:

Arsenal will look to take control of their Europa League semi-final with a win over Atletico Madrid when they arrive at the Emirates on Thursday night.

Goalkeeper: David Ospina was back between the sticks for the win over West Ham on Sunday but Petr Cech is expected to return after recovering from a minor hip injury.

Defence: Wenger took a huge risk by fielding his strongest back four at the weekend but thankfully they all came through the game unscathed so I expect an unchanged defence tomorrow.

That means Shkodran Mustafi will continue alongside Laurent Koscielny in the middle of the back four while Hector Bellerin and Nacho Monreal will once again occupy the full-back positions.

The likes of Calum Chambers, Rob Holding and Sead Kolasinac will battle for positions on the bench.

Midfield: Mohamed Elneny is unlikely to play again this season after sustaining ankle ligament damage during the 4-1 win over West Ham at the weekend so he’s certain to miss out tomorrow.

The good news is that Jack Wilshere is back in full training after recovering from his own ankle problem so he’s expected to be recalled against Atletico on Thursday night.

Aaron Ramsey was excellent once again on Sunday so he’ll keep his place in midfield while we’ll need a disciplined performance from Granit Xhaka in the holding role.

Attack: Pierre-Emerick Aubameyang is ineligible so Alexandre Lacazette will lead the line up front and he should be in confident mood after scoring twice against the Hammers last time out.

Mesut Ozil missed the game at the weekend due to ‘illness’ but the German international took part in full training today so will no doubt return to the starting eleven against Madrid and this is a huge game for our playmaker.

Henrikh Mkhitaryan is back in light training after recovering from a knee injury but this game will come too soon for the Armenian international so we have a void to fill in attack.

Alex Iwobi was extremely disappointing at the weekend while Danny Welbeck has hit a bit of form so I’d expect him to get the nod in the final attacking position. 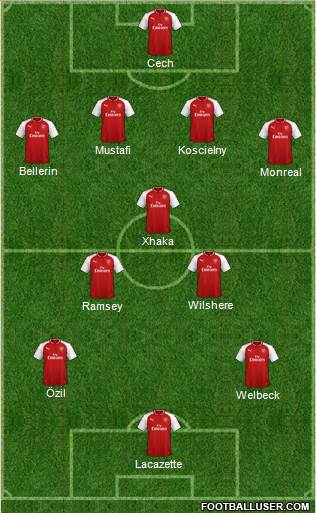