What a Monday Night it was! My Monday Nights are usually dedicated to Monday Night RAW except for Mondays when Chelsea play and yesterday was amazing! Of course we’re maintaining a superb record at the Reebok, being unbeaten there for 13 years, … 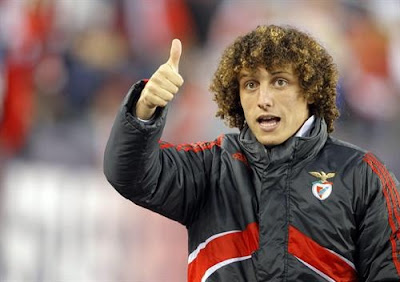 The grand talk of the week is ‘Luiz of Benfica to Chelsea for ₤21m’. Who is this Luiz? He is a Brazilian International, 23 years of age, playing for Benfica, a Portugal Top Division Club. Benfica bought him from Brazilian Club Vitoria for ₤440,000 in 2007. He is a natural Center Back but can competently play in the Left Back. He played most of the 2009 season in the Left Back position for Benfica. Had only one major injury so far in his career, a Metatarsal fracture, which kept him out for 9 months in 2008. His agent is Giuliano, who is also the agent for our Center Back Alex and Jo of Manchester City.

Now there have been loads of talks, criticisms and comments on this proposed Transfer. Reports suggest that Chelsea have applied for Work permit and the hearing will take place tomorrow although nothing is announced officially yet. Many welcome this move and some criticize this move. Among the many criticisms, the main ones are ‘₤21m for a 23 year old Defender is too much’, ‘We don’t need another Center Back, we are already having four’, ‘This will reduce the chances for Bruma – worse will make him to seek another club’. For me these three allegations are the ones of the value of at least considering.

Firstly ₤21 Million Pounds for a Defender has been harshly criticized by Pundits. Indeed I have to agree ₤21m for a 23 year old is really an ‘inflated’ price, but to sign ‘good’ talent we have to pay the price. Indeed United paid ₤30 million in 2002 to sign 24 year old Rio Ferdinand from Leeds and City Paid ₤24 million for 27 year old Joleon Lescott in 2009. If ‘inflation’ adjustment is done to match the current market Price paid for Rio Ferdinand will be even more, thus provided David Luiz becomes a hit in the Premier League the price paid will be a fair one, because we have paid sums like ₤21m for Wright-Philips, ₤18m for Zhirkov, and the most famous ‘flop of all time’ ₤30.8m for Shevchenko, compared to those, if Luiz becomes a hit, which he has enough potential, the money paid will be ‘peanuts’ for Chelsea, but the point here is that big ‘IF’, only time will answer that. After watching Berbatov impress at United after two mega sloppy seasons, I feel we could have given Sheva a bit more time & opportunities, anyways what was done is done, it cannot be undone. I’m happy Ancelotti is giving enough chances for Ramires and Ramires is showing signs of constant development. In this back drop in regard to the price paid for Luiz, although it may be ‘over the range’ now, if success follows, it could be considered fair.

The second & third allegations (which I tend to put together) – ‘Do we need another CB?, we already have 4 and another addition will affect Bruma’ is a more of an hyperbolical contention in my opinion. The major defensive players we have are Terry, Ashley, Alex, Ivanovic, Bosingwa, Ferreira, Bruma and Van Aanholt. I shall distinguish Terry, Alex and Bruma as CBs, Ivanovic & Bosingwa as RBs, Ashley & Van Aanholt as LBs and Ferreira as a last resort RB & LB backup. Some may contrast from my idea of distinguishing Ivanovic as a Right Back and claim that he is a Center Back, but for me I feel Ivanovic is a better RB for Chelsea than a CB. Last season, where he was voted Best player, he mostly played in the RB and was superb! So I believe Ivanovic should be played in the RB than CB. Then, I would leave Ferreira out of contention, because in my opinion he is no more of any substantial use for Chelsea, he could only act as a last resort back up. So leaving out Ferreira we have 3 CBs, 2 RBs & 2 LBs, out these 2 are youngsters and 2 are 30 years old and one is currently injured, Thus I don’t see any fair point in the arguments that we don’t need a Center Back. Then arises the question how will we manage to play all of them? In other words, if we have 4 CBs, how will we manage games between them. The simple answer would be rotation.

There had been enough arguments and grievances on Ancelotti not giving enough chances for Bruma but what I personally feel is had we maintained the same ‘perfect’ run we had in the start of this season, definitely in games against ‘lower’ teams youngsters would have started, the simple reason Ancelotti is stepping back in giving youngsters a chance is because he doesn’t want to take another risk and that’ll be a bad risk also affecting those youngsters. Because it’s a simple psychology of fans that if the team badly lose the manager is blamed, now we blame Ancelotti for losing saying we could have played the youngsters, had Ancelotti played the youngsters and lost, these same fans, at least most of them would have blatantly commented badly about Ancelotti’s risk and such comments would badly affect the youngsters’ morale and confidence. Hence, I understand Ancelotti’s decision. All this hype about letting youngsters play is simply because of our bad run.

Being a manager who brought up players like Kaka & Pato I’m sure Ancelotti know the way to handle youngsters better than these football ‘pundits’. Coming to rotation. Terry is now a regular for us despite carrying a problem in the back. He is 30 now and if we want him to play for another 3-5 seasons we need to give him rest, in other words burden of matches on him should be reduced, whether he likes it or not, it is a must to sustain his fitness. Secondly, Injuries can occur to anyone at anytime, thus we need ‘proper’ back ups, I do not see players of the kind of Ferreira as a ‘good & proper’ back up. Considering all these factors I would strongly back the signing of Luiz and I’m sure it will not affect Bruma’s chances as he is young (19) and has enough time especially compared with our aging squad. I think Luiz’s signing will be an ideal one through which we can develop a good center back partnership between Luiz & Bruma for the future. Hence, I back the clubs decision to sign David Luiz (if it is happening | so far no official announcements).

DO WE NEED ANY MORE PLAYERS?

Yes, definitely we need a Striker – young, skilled and with flair and a Midfielder like Sneijder! – May be in the summer!