Liverpool take on Real Madrid in the Champions League final in Kiev on Saturday evening. Here is the side I think Jurgen Klopp will select for the game:

Liverpool face their date with destiny when they take on Real Madrid in the Champions League final in Kiev on Saturday evening.

Goalkeeper: Loris Karius is the established number one at Anfield and he’s performed well during the second half of the campaign so there’s little doubt he will keep his place ahead of Simon Mignolet this weekend.

Defence: I don’t think we’ll see Klopp making any changes to what has become his preferred back four in recent months as he’ll obviously go full strength against Madrid.

Trent Alexander-Arnold has been outstanding at right-back this season so he should keep his place ahead of Nathaniel Clyne tomorrow while Andrew Robertson is the clear choice ahead of Alberto Moreno following an excellent debut season at Anfield.

Dejan Lovren’s form has improved in recent weeks so with Joel Matip and Joe Gomez out injured, the Croatian international should continue alongside Virgil van Dijk against the European champions.

Midfield: Liverpool have been handed a huge boost with Emre Can fit to return to the squad following two months out with a back injury but after so long on the sidelines I think Klopp will leave the German international on the bench.

James Milner has been declared fit to return after missing the win over Brighton on the final day of the Premier League campaign with a muscle injury so he should take his place in midfield along with Jordan Henderson.

Alex Oxlade-Chamberlain is unavailable due to a long-term knee injury and while Adam Lallana is back in contention, I think Georginio Wijnaldum has done enough to keep his place in midfield.

Attack: There is little debate over how Liverpool will line-up in attack as Klopp is obviously going to go with his devastating trio for this monumental game.

Mohamed Salah is the main threat after enjoying a sensational first season with Liverpool and he’ll be looking to shine up against Cristiano Ronaldo.

However, we shouldn’t overlook the importance of Roberto Firmino and Sadio Mane, and along with Salah the front three have the ability to cause Madrid plenty of problems tomorrow.

Dominic Solanke will drop to the bench after enjoying a rare start against Brighton and he’ll be an option among the substitutes along with Danny Ings. 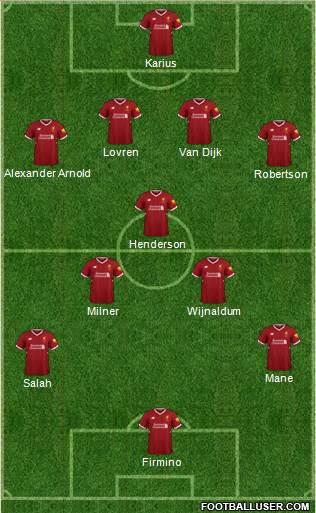