Philipp Max is keen to join Manchester United as Jose Mourinho eyes a summer swoop for the £35m-rated Augsburg defender, according to reports

The summer transfer window is open and managers are working hard on their transfer targets so we’ll bring you all the latest gossip from around the globe. Today, Man Utd are linked with Philipp Max…. 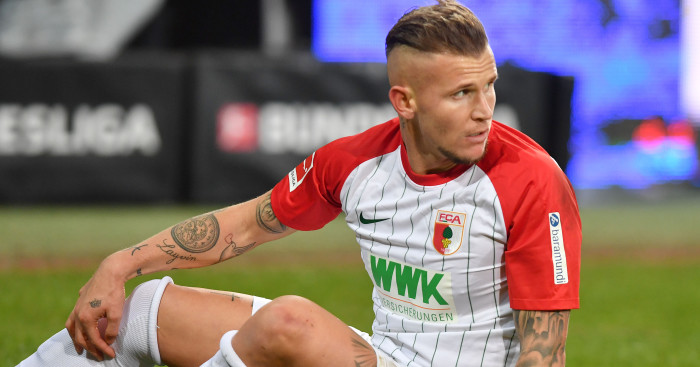 Philipp Max is keen to join Manchester United as Jose Mourinho eyes a summer swoop for the £35m-rated Augsburg defender, according to reports via TeamTalk.

Mourinho is expected to strengthen throughout his squad this summer as the latest football odds for the 2018/19 Premier League season show United are only the 3rd favourites for the title so Jose knows his side need to improve if they’re to catch Manchester City next season.

A new left-back is a priority as Luke Shaw’s future is in doubt after failing to establish himself under Mourinho while Ashley Young turns 33 next month so a long-term replacement is needed. United have been linked with the likes of Danny Rose and Alex Sandro in recent weeks but TeamTalk are citing a report from Germany that claims Mourinho is now eyeing a move for Max.

The 24-year-old has developed in to one of the best full-backs in the Bundesliga since joining Augsburg from Karlsruher SC in 2015 and he’s on the cusp of breaking in to the German national team set-up.

It seems Max would jump at the chance of making a move to Old Trafford as a source close to the player has claimed the defender is ‘ready to join’ United and Augsburg have supposedly set an asking price of around £35m [€40m].

The source is quoted by TeamTalk as telling CalcioInsider:

“He is keen to move up in the career, he loves the Premier League and is ready to join Manchester United – his favourite club.

“Philipp is the best (left back in Germany) and at his peak now, Augsburg would want around €40m.”

United have lacked creativity from wide areas at times but Max could be the ideal solution as the attacking full-back provided an impressive 2 goals and 13 assists from left-back last season to help Augsburg finish 12th in the table.

We’ll have to wait and see if Mourinho decides to formalise his interest in Max over the coming weeks but it seems the player would certainly be open to a move if United come calling this summer.