Tottenham take on Watford at Vicarage Road on Sunday afternoon. Here is the side we think Mauricio Pochettino will select for the game:

Tottenham will be looking to maintain their 100% start to the new season when they take on Watford at Vicarage Road on Sunday afternoon. Here is the side we think Mauricio Pochettino will select for the game:

Goalkeeper: Pochettino will be forced in to a big change between the sticks as Hugo Lloris has been ruled out after picking up a minor thigh injury. The Frenchman is hoping to return after the international break but for now Michel Vorm is expected to deputise against Watford.

Defence: Tottenham played a back four to great affect at Old Trafford on Monday night so Pochettino will be tempted to stick with that system rather than revert to the back three that he played against Fulham.

Toby Alderweireld was selected ahead of Davinson Sanchez during the 3-0 win over Manchester United and was excellent so he’s expected to retain his place alongside Jan Vertonghen on Sunday.

Kieran Trippier will most likely remain at right-back ahead of Serge Aurier but Pochettino may opt to recall Ben Davies on the opposite side with Danny Rose dropping out.

Midfield: Mousa Dembele was recalled against United and the Belgian international probably did enough to keep his place alongside Eric Dier in the middle of the park this weekend.

Victor Wanyama is back in full training after recovering from a serious knee injury but the Kenyan international is unlikely to start just yet so a place on the bench alongside Harry Winks is probably the best he can hope for.

Attack: Harry Kane scored the all-important opening goal at Old Trafford and the England international is certain to keep his place so he’ll once again lead the line up front.

Lucas Moura continued his excellent start to the new season after scoring two fine goals during a Man of the Match performance against United so the Brazilian should keep his place in attack.

Dele Alli and Christian Eriksen should also start once again and support Kane and Moura in attack but Spurs will continue to be without Hueng-min Son as he’s still away on international duty at the Asia Games.

Erik Lamela will be handed a late fitness test after picking up a hamstring injury in the warm-up prior to the United game but Moussa Sissoko has been ruled out. 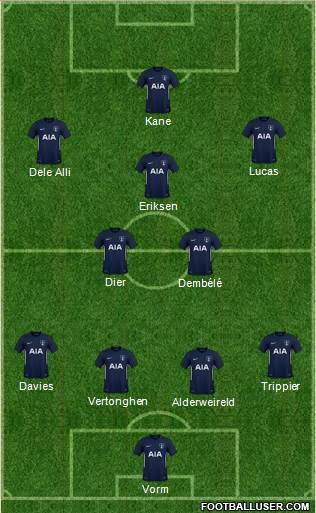